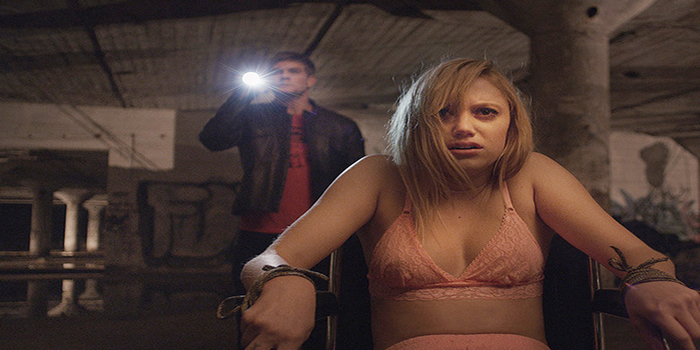 It Follows, the second feature film from American filmmaker David Robert Mitchell, is the kind of movie that makes life a headache for any would-be critic who wants to do it justice in a review. It’s one of those films where the less you know about it going in, the better. Because I’m loathe to tell you what it’s about, that in turn makes it difficult to describe what you will experience across the course of the movie. But because I thought the film was awesome, I want to write about it so more people can go and see it and make a bunch of money for the director, who in turn will be empowered to make more awesome films. So I’m gonna give it a go.

I haven’t seen Mitchell’s first film, but I do know it’s not a horror movie. This is his first attempt at doing something in the genre, but you wouldn’t know from watching it. It Follows is a masterclass in terror, made by a talented filmmaker with an innate understanding of his craft. Mitchell has said the film was inspired by recurring nightmares he had as a boy. Somehow, he has achieved cinematic alchemy and found a way to distill that essence-of-nightmare, capture it and bring it to life on the screen. There is a sense of dread smeared throughout It Follows, one that you can feel during every minute of its 99-minute running time. It never lets up, not even during the quieter moments. The worst thing in the world is something you can never escape from, and there is no escaping the constant malevolence that’s present at all times. Even the gentle moments feel ominous.

Withins seconds of it starting, I was intrigued, then I was repulsed, then I was anxious, then I was terrified, then it was over. Only it wasn’t. The best horror films stay with you long after you’ve left the cinema, and It Follows will remain with you for a while (a fact that is deeply appropriate in relation to its plot which, as I said, I’m not discussing here).

I can’t tell you what it’s about, though I can tell you which directors it reminded me of: great names like Carpenter and Kubrick, but It Follows is no cookie-cutter hack job. This isn’t plagiarism dressed up as homage. David Robert Mitchell has a creative voice which is all his own and his sophomore effort looks and sounds – thanks in part to a genius soundtrack from electronic artist Disasterpiece – utterly fantastic. The director knows at all times exactly what he wants us to see and hear. The movie’s audio and visual triggers will have you on the edge of your seat.

It’s been a while since I’ve seen a film which made me think twice before turning out the light as I went to bed. It Follows is a breath of fresh air and an instant classic. Turn the lights down, the volume up and keep a soft object handy in case you need something to hide behind.