If you enjoyed The Night of the Hunter and Diabolique, boy do we have a treat for you. 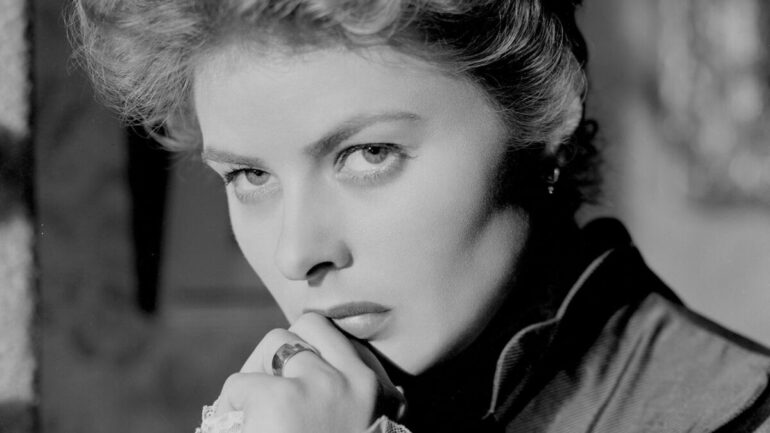 The Night of the Hunter and Diabolique both turn 65 this year, but they have much more in common than that. They are both serious films for adults that still greatly involve children, The Night of the Hunter is co-led by a pair of siblings while Diabolique takes place largely at a school. Both feature powerful women standing their ground against violent misogynists and engage in somewhat surprisingly progressive themes of gender for the 1950s. They also both gave us iconic images of bodies submerged underwater.

But what’s most exciting about the two films is the way they melded the genres of film noir and horror. Plot wise both begin rather firmly in noir territory as in The Night of the Hunter we see Robert Mitchum’s preacher Harry Powell (arguably his greatest role) seek out a young widow to wed and kill for her money, and in Diabolique we are introduced to the wife and mistress of an abusive man scheming together to kill him.

As the films go on their horror aspects start to grow, both in their stories and their formal elements. We see more and more dark hallways and eerie gothic landscapes as our respective protagonists begin to fear what will happen in the aftermath of their actions, or are stalked by a murderous preacher. By the end, both films perfectly blend the elements of noir and horror to bring us uniquely beautiful and unsettling viewing experiences, and so to celebrate six and a half decades of those classics, I want to highlight six other films that effectively mix horror and noir. 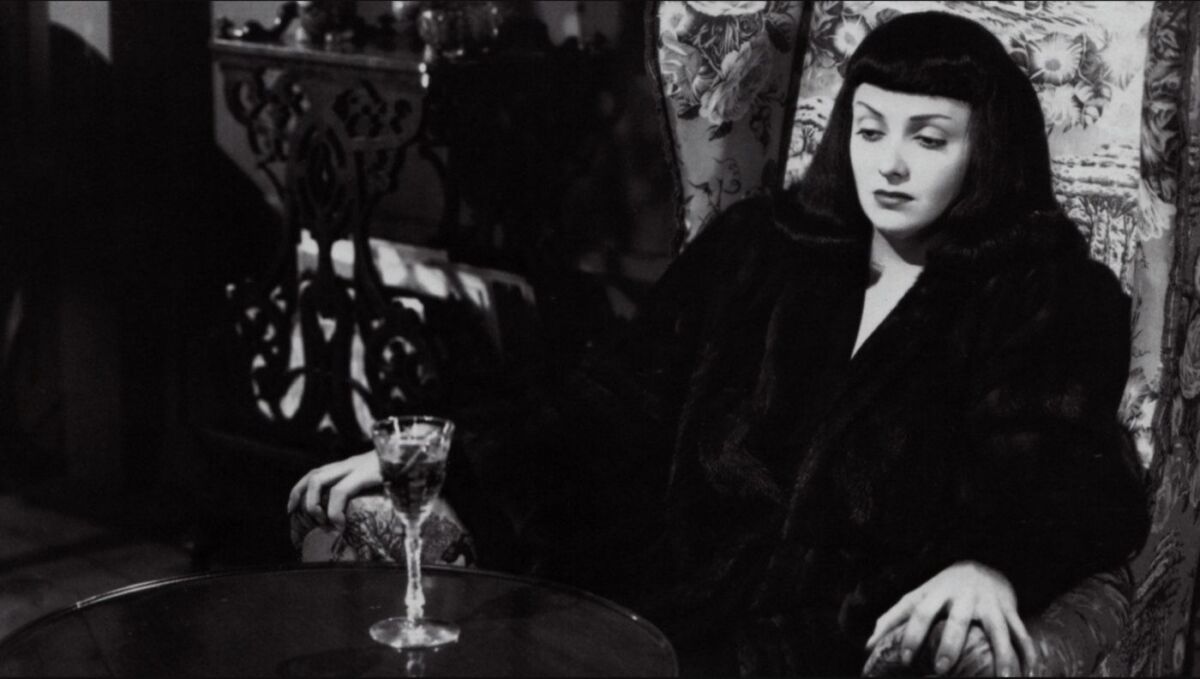 I’ve already written about another one of Val Lewton’s horror B movies for RKO Pictures, but it is far from the only one of those films worth your time. The Seventh Victim is another film, much like Night of the Hunter and Diabolique, was far ahead of its time for a variety of reasons, including the respectful depiction of one character wanting to die, Lewton even said of the film that he wanted to convey that “death can be good.”

The film’s plot begins as a somewhat classic noir story, though one notably focused on women. We are introduced to Mary, who has to has to leave her boarding school when her older sister Jacqueline suddenly stops paying tuition. When Mary arrives in New York, where her sister lives, she learns that Jacqueline has gone missing, and so begins an investigation. The film is gorgeously shot and even before the plot moves into explicit horror territory, the deep blacks of hallways and alleys put the audience on edge, always expecting something scary to be just around the corner.

The horror in the film comes more from the tone, look, and feel of the film and not as much the satanist cult we learn Jacqueline has become involved with. The cult ultimately seems a bit sad, likely because while the film invokes Satan, it stays firmly grounded in the real and never brings in any supernatural elements, meaning that the cult doesn’t seem much different from a slightly spooky (and very arrogant) reading group.

It is also very important to note that we might not have Psycho’s iconic shower scene if The Seventh Victim hadn’t already created the shot. 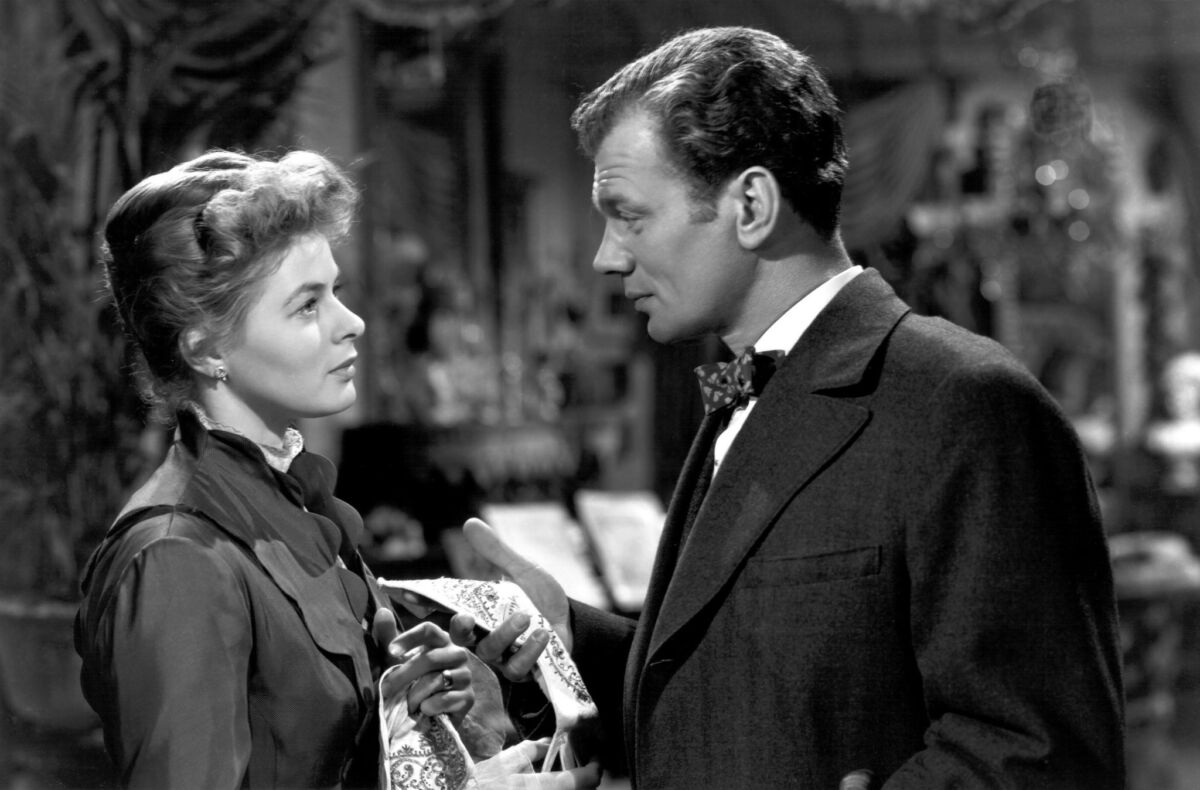 Likely the most well known of the films on this list, George Cukor’s Gaslight is an undeniable classic that turned “gaslight” into a verb, meaning to convince someone that they can’t trust their senses and memories.

Gaslight beautifully mixes its horror and noir elements and creates a blueprint for some of the other films on this list. On a plot level the film is a simple crime story of a man hunting jewels, but it’s the psychological torture that he submits his new wife to that makes the film truly horrifying.

Ingrid Bergman plays Paula who returns to her old London home with her new husband Gregory after years away because her aunt was murdered there. Returning to a traumatic place of course creates discomfort for Paula (and the audience) and this discomfort is then manipulated by Gregory to push Paula further and further into doubting her own sanity. The film is remarkable for the way that it consistently identifies the audience with Paula and her plight while simultaneously showing how Gregory is manipulating her. In fact, by showing his manipulations the film creates an even greater tension and sense of unease as we know the man that seems to comfort Paula is in fact the one torturing her.

Both The Night of the Hunter and Gaslight portray greedy men who at a minimum see the women who stand in the way of their material gain as obstacles, and at most revel in their pain. 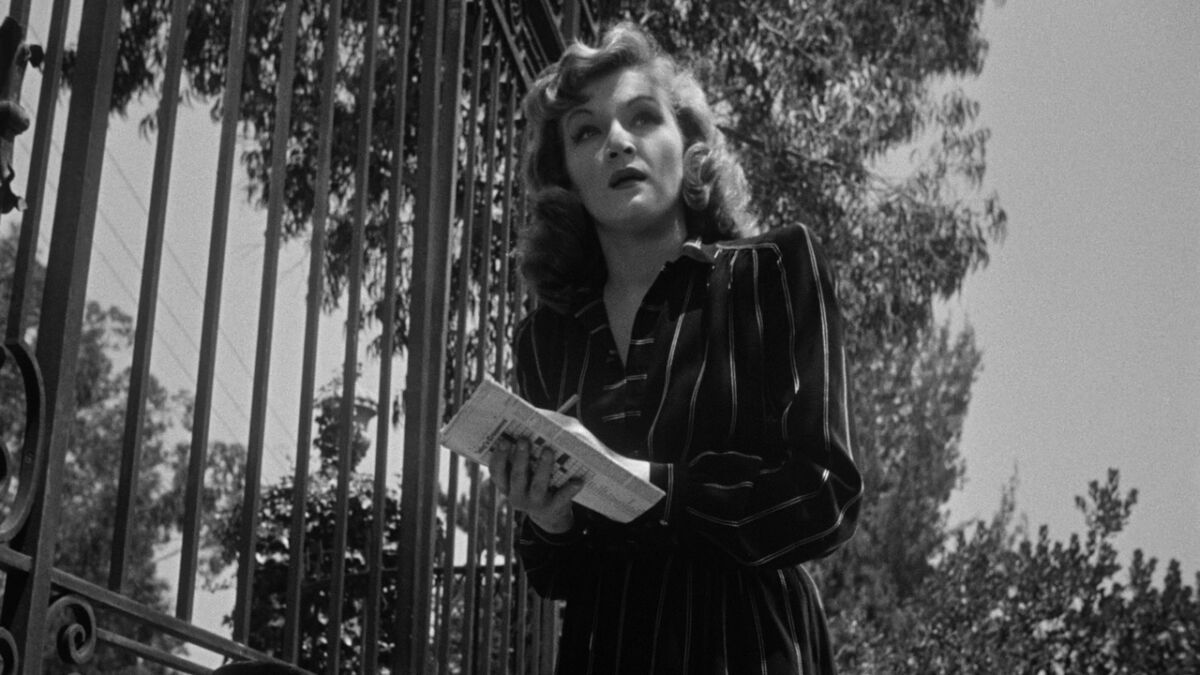 What makes the films different, besides the fact that My Name is Julia Ross takes place in a stereotypically gothic giant mansion over the sea, are the approaches that the villains take, and the reactions of the heroines. Gaslight clocks in at just under two hours, it takes its time showing the systematic way in which Gregory seeks to drive Paula into questioning her sanity.

By contrast, My Name is Julia Ross is a 65 minute B movie in which the villains, a sadistic man and his loving mother, kidnap the titular Julia and immediately begin to tell her that she is someone else and is suffering from a nervous breakdown. These different approaches to pushing the women to question their sanity almost certainly play a role in their responses as Paula does indeed begin to question herself, while Julia never wavers in her certainty that her name is Julia Ross. As such the horror in the film is much more direct as we see Julia’s many attempts at escape and convincing people to help her prove futile, creating a dread inducing despair in her and the viewer as the film goes on. 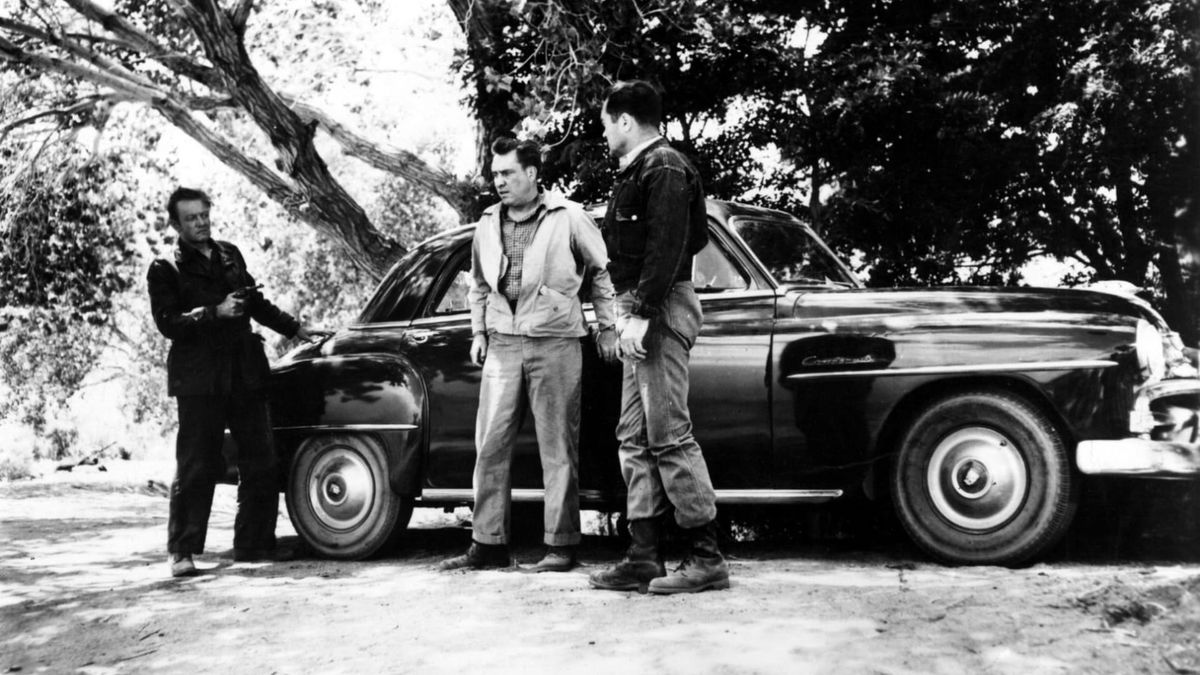 Ida Lupino’s The Hitch-Hiker is the only noir directed by a woman, so it may seem ironic that it’s one of two films on this list to focus on men, and the only one to have no meaningful female characters at all. The plot focuses on two friends who are driving down from California to Mexico on a fishing trip, and along the way pick up a hitch-hiker who turns out to be a sadistic killer, played fantastically by William Talman. From there the film is essentially a three man show as we watch the two friends attempt to leave behind clues for potential rescuers and find ways to escape their situation.

Based on a true story, the film is still highly stylized, using stark lighting and the close quarters of the car to create a claustrophobia in the leading men and the audience. The film is notable not just as an instance of the melding of noir and horror, but also for its setting in the American Southwest, lending it the look and feel of a western as Lupino uses her camera to take in some of the gorgeous landscapes and rock formations of the desert. Like Ridley Scott’s Alien, The Hitch-Hiker uses both claustrophobic space and wide open space to create fear and emphasize the inescapability of the horror that the characters find themselves in.

Talman was later recognized as the hitch-hiker by someone who came over and slapped him. He said of the experience: “You know, I never won an Academy Award but I guess that was about as close as I ever will come to one.” 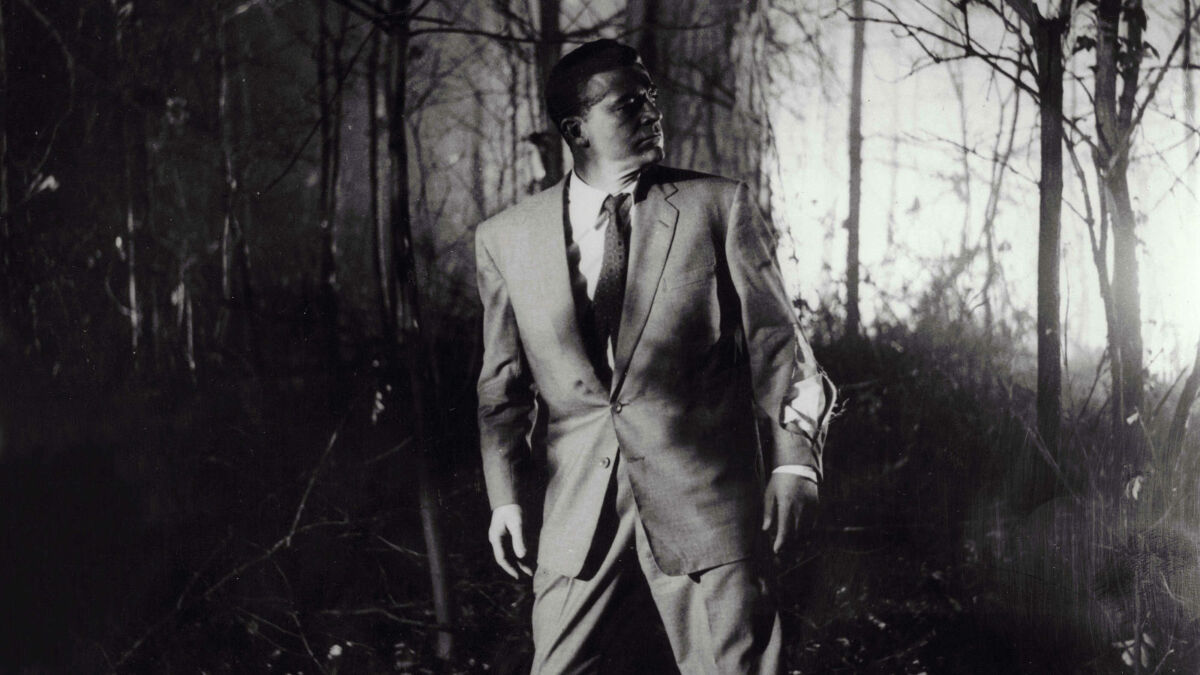 The only movie on this list that includes the supernatural is also one of the two with a leading man instead of a leading woman, though unlike The Hitch-Hiker there are some women in Night of the Demon. It’s also explicitly about the battle between that leading man of science’s skepticism and the possibility of something supernatural actually existing. So if you enjoy self-described “rational men of science” being proven wrong this is absolutely a movie for you.

The film is directed by Jacques Tourneur who successfully helmed a number of horror films and the noir classic Out of the Past in the previous decade, so it’s no wonder that he was able to brilliantly bring the two together in Night of the Demon.

The story follows psychologist John Holden as he embarks on what essentially plays like a supernatural noir, moving from one clue to another to piece together what has happened to a colleague of his. The film engages in classic horror plot points and set pieces, including a séance and the involvement of an alleged satanic cult, but the experience of watching it feels more like watching a private dick sort out a mystery. This is purposeful as it identifies us with Holden, who is skeptical of all the supernatural arguments for what has happened (and continues to happen as the film goes on), but becomes more and more frightened as evidence mounts, pushing him and the audience to consider the possibility that there truly is something supernatural going on. 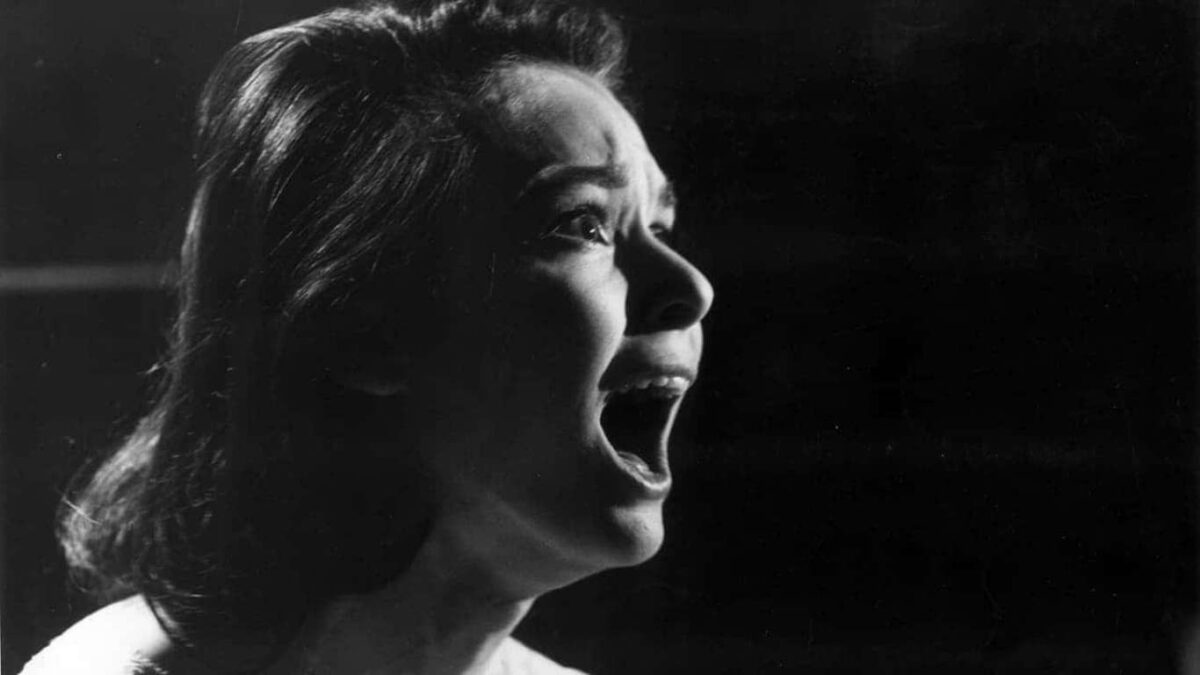 Released in what may be considered the last year of classic noir along with the more specifically noir Blast of Silence, Taste of Fear pulls from Gaslight and My Name is Julia Ross to tell the story of a young woman who is brought to (another) beautiful home above the sea and systematically made to doubt herself. In Taste of Fear, Penny returns to her father’s home for the first time in years after a riding accident leaves her paralyzed to find the stepmother she’s never met running the house because her father is apparently away on business. Penny begins to suspect something sinister may be afoot when she sees her father one night, lifeless in a chair, staring at her with dead eyes.

While the film shares plot points with Gaslight and My Name is Julia Ross, it is far more visually striking. The film is one of Hammer studios black and white films as opposed to their extravagantly colourful classic monster films, which makes it significantly more frightening than those comparably fun romps. The black and white cinematography shines throughout, but especially so in a sequence that simultaneously places it in the same league of creating beautiful and frightening underwater images as The Night of the Hunter and Diabolique, as well as sets it apart from them. After seeing her father Penny falls into the home’s unlit and dirty pool and the camera swirls about chaotically in the murky water placing the audience in Penny’s point of view as she fearfully struggles.

As it goes on the film takes a number of twists and turns reminiscent of the latter half of Diabolique. As in that film, these twists create more and more anxiety and dread in the viewer as we desperately want to know what’s really going on.

The film also stars a young(er) Christopher Lee, who believed it was the best Hammer film he was ever in.

READ NEXT: 17 Best South Korean Movies of All Time