A lot of medical dramas see medicine as simply making people better and moving along. New Amsterdam isn't like that. 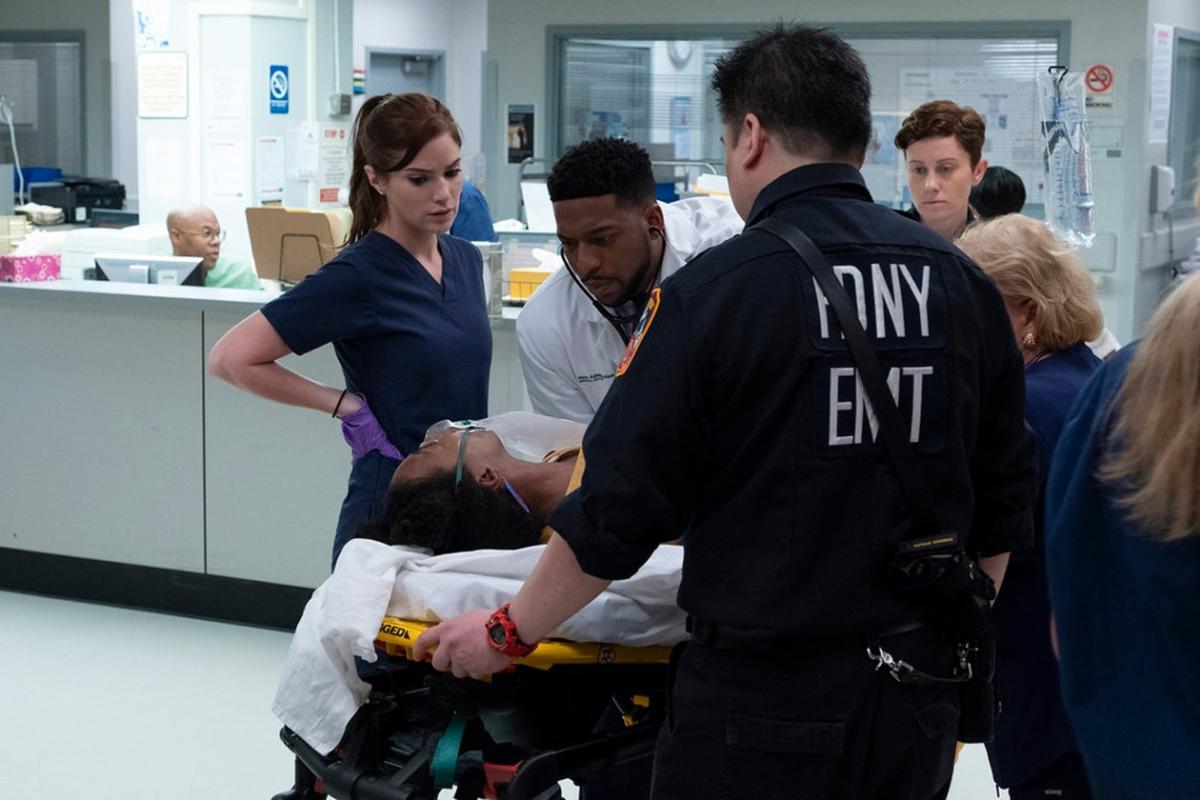 The latest episode of New Amsterdam, “Happy Place”, means something different for each one of the characters this week. It’s an episode full of emotions, decisions, and some literary shifts that will carry us towards the season finale. After Dr. Sharp quit as Max’s doctor, it’s been a struggle for Max to get along with the new one. The difference here is that while Max could get away with ignoring Dr. Sharpe’s orders, he can’t quite do that with Virginia. It’s an interesting and dynamic arc that New Amsterdam has chosen to follow this season, and it makes us curious how it will stay sustained in the episodes to follow. Rather than turning the Helen/Max storyline into a romantic, against all odds type of love story, New Amsterdam is choosing to go about this in a whole different way. It’s actually what makes the show more fun to watch. Instead of concentrating on the sexual tension, it’s concentrating more heavily on why sometimes love has to take a backseat to other things in life, in this case, Max’s health.

“Happy Place”’s central storyline involved two individuals getting into a car accident after the man, Leo, swerves into another car and hits a female cop named Maria. There is a lot of heaviness in this part of the episode for many reasons. First off, Leo was presumed to be drunk when he ran into Maria’s car, but this is not what happened. His tox screens come back clean, but instead Dr. Sharpe learns he had a stroke behind the wheel. It’s a tough situation because the entire police department is crowding the emergency department in support of Maria. The emotions are running high and the blame game is in full force. It’s a pivotal storylinem because it’s often hard to separate truth from emotions. Having your friend fighting for her life is a rather serious ordeal to go through – but at the same time, how can the other individual be blamed when it was not a result of drunk driving, but rather a medical issue? New Amsterdam’s take on it is one that stands out but it’s not the first time a medical drama has done a story like this. There are many examples present in Grey’s Anatomy where two conflicting patients and issues collide, and the concept of right and wrong goes out the window.

Dr. Kapoor has an interesting case in “Happy Place” that involves a once-deaf patient who wants to go back to being deaf. It’s rather intriguing, right? It’s such a one-of-a-kind storyline, the complete opposite of what you’d expect – how often do you watch a medical drama that shows a patient coming in looking to reverse a corrected defect? Well, that is the case in this episode of New Amsterdam. Overwhelmed by sound and upset over the drift it has caused in her relationship, a woman named Margaux is eager to get the cochlear implant taken out. Things were better for her when the implant wasn’t there, and she’d like to go back to that point in her life. It’s a devastating but inspiring story for multiple reasons. First off, Margaux has to make a drastic decision that will improve her quality of life but it’s also something she wanted in the first place. It put her through the wringer along with her wife. Now, asking to reverse it all is a difficult thing to ask for, and it makes for some very emotionally heavy moments.

It’s a very uplifting story that made “Happy Place” really special. A woman who fought to find herself again, who can’t find inspiration in that? And what makes the whole thing even better, is that her wife was extremely supportive and stuck by her side. Sure, she was frustrated because they were having problems, but she chose to get Margaux through the whole ordeal. Where other medical dramas would have opted to focus on the drama, New Amsterdam chose to keep it classy and sentimental. This is one of the strongest points about New Amsterdam, it takes the dramatic and makes it into a heartfelt, teachable moment.

Going back to the Maria/Leo storyline, there is another aspect of it that really hits hard. Floyd is the surgeon who operates on Maria, but when things go wrong during surgery and she dies on the table, he’s shattered into pieces. It’s a difficult scene to watch because it’s a reminder that doctors are humans that can mess up or have a crappy day as a result of a bad day at work. The only difference is that they are held accountable for every single thing they do, and will have severe repercussions if things don’t go as they’re meant to.

Similar to The Resident, New Amsterdam also likes to focus on the bureaucratic aspect of medical facilities. They have many episodes that expose the tragic secrets of how hospitals are run and how their bottom line is always about making a profit. Such is the case in “Happy Place” when Max and Helen try to figure out how Leo’s surgery will be paid for. The thing is Leo has a voucher from the VA that pays for 75% of the surgery, and expects the rest to be paid out of pocket. Max is willing to take the voucher but it turns out it’s not that easy and he can’t. And if he does and they pay the rest of the costs, it won’t exactly bode well for everyone. Basically, the options are just helping Leo or trying to advocate for veterans’ rights. It’s a horrible situation to be stuck in the middle of, and a stark reminder that veterans are often ignored and not taken care of. Luckily, medical dramas are taking it upon themselves to address such issues and let the public know of the secrets behind hospital walls and board rooms.