Historian Himself returns for a second interview, bringing with him South African duo Yugen Blakrok and Kanif. 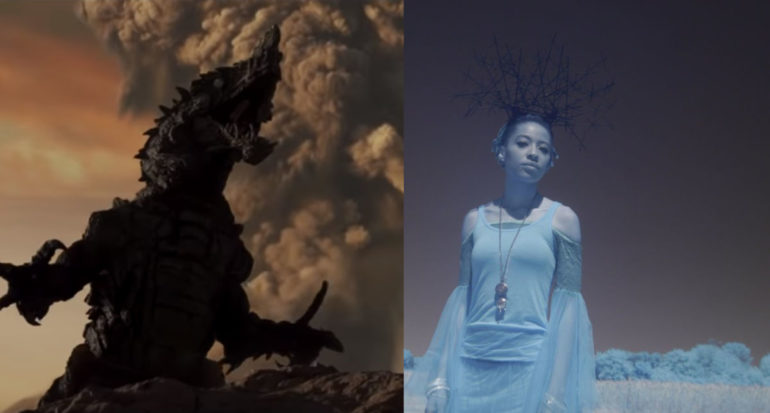 A few years ago, I published a long, detailed interview with Brian Engh, otherwise known as Historian Himself. I had stumbled across Brian’s work through sheer luck, and upon discovering the breadth and magnitude of his doings (rapper, producer, artist, sculptor, film-maker, paleo-archeo-mytho-phile) I made it my mission to seek him out.

It’s a warm, energising feeling, discovering someone new and brilliant, and it’s a feeling that I and many others also experienced when first hearing Yugen Blakrok. An MC from Johannesburg, Yugen has spent years carving out a reputation in her homeland, but towards the end of 2018 a guest verse on Opps, a track on Kendrick Lamar’s Black Panther album propelled her into global acclaim, and as luck might have it, she was poised to release her most recent album, Anima Mysterium, shortly thereafter.

Why does Yugen stand out? Once again, her bars are tactile, laden with sinister, deep and existential imagery, laid out in strands of versatile, uncompromising narrative which demands attention, especially when placed alongside the kind of LA style beats present on the Black Panther album. So, taking that into account, when I found out that she had recruited Historian to feature on her album, it was a revelation, and one which morphed into an opportunity to arrange another interview.

This is how I found myself hooked into a conference call with Yugen, Brian and Yugen’s producer Kanif, poised to find out exactly how these minds came together. “Something funny happened,” Kanif reflected. “I was introduced to Brian’s music through a guy we work with called Shorty Skilz, and I’d been waiting to show it to Yugen for ages but she was out of town at the time.” Yugen interjected “Meanwhile, completely separately, an artist named The Buttress had told me about his stuff, but there was some weird shit going on with YouTube at the time which was blocking me from watching them. So when I got home Kanif was excited to show me this stuff and I had already been trying to find it. This was around the time I was first getting back into the studio. I reached out to him straight away after that.”

On the opposite end of the spectrum, Brian had his own experience “Bethany [The Buttress] had similarly shown me some of [Yugen’s] stuff, and at the point of contact I had been quietly following it for a while already, but I remember even at that time thinking that she was exactly the kind of lyricist I wanted to work with”. “That’s the vibe” Yugen interjects, smiling. “Converging energies man.” This convergence led to the trio collaborating on ‘Hibiscus’, one of the most storming, potent tracks the album has to offer.

Of course, with so much abstract creativity on offer, not just from those three but also the garrison of other featured artists on the album (Jak Tripper, Fifi the RaiBlaster and, amazingly, Kool Keith), it must have been an interesting creative process. “I chose them all because they would bring something that I wanted, there were no briefs at all” Yugen says. “The people from home I’d worked with on other projects or labelmates I wanted to work with anyway. With Brian it was a matching vibe, lyrically and spiritually, and it’s similar with Jak. He in particular has a side, among his many, which is mad sensitive, and I felt confident enough in knowing him to just send the track. Kool Keith was a bit more difficult, I felt like I was asking as a fan, which was nerve-wracking, Kanif actually suggested it and I spent days getting mad at him for even suggesting it.”

Kanif has his own perspective “It was actually while I was making the beat for the track and flipping some vocals. I just kept hearing Kool Keith on it, I knew it needed to happen.” He says, before Yugen elaborates, “I remember coming into the studio that day and he said to me “Kool Keith would sound nice on this” and I just walked straight back out of the room, like “I’m not listening to you!”. A few days later it had actually found its way into my psyche, I was dreaming about being with him in the House of Ravens video, in a car going somewhere. When I sent him the track his response was so enthusiastic and he was like “I’ll have a bit for you by Wednesday!” and it was Kool Keith, you know? He was excited to be on my shit.”

Kool Keith’s presence, as much as Brian’s, fits perfectly. Anima Mysterium has been out for almost 10 months now and has been featured on numerous ‘Best of 2019’ lists, and Yugen and Kanif have toured extensively all over Europe since then. For Yugen, and everyone else, it was certainly a major milestone. “There was never really a compass, everything was organic, from the outset. It was just a free-flowing exchange of ideas from us in the studio to all the artists who featured.” Kanif says, with Brian adding “even when speaking to Yugen for the first time I was like “I already know this person” – someone who was interested in making new things, as well this artistic overlap. What’s interesting is with Yugen’s lyrics there’s a lot of space imagery, which is something I’ve only really just dipped my toe into, but it’s been bubbling in the back of my mind for a long time, but didn’t feel like I was ready. So I’m at that point, then I meet Yugen and it’s like the next logical step, organically and collaboratively is right there in front of me.”

Of course, part of the purpose of this interview was a chance to catch up with Brian on his own creative exploits. When I first spoke to him, it was mostly around his Earth Beasts Awaken album, a hip-hop Kaiju epic twinned with two truly astonishing videos featuring his monster puppets. He has since released another album, Gather Bones, and plenty more material besides. “Right now there’s multiple different schemes, the problem I’m having is that people keep hiring me to draw dinosaurs. It’s a weird, fucked up problem to have but the work I did in creating the puppets for Earth Beasts now has me making new models for a museum.” And, with that, Brian produced a dinosaur head puppet from under his desk, prompting three unified gasps from everyone else on the call. “This isn’t done but this is one of them, I still have to sculpt the skin, the neck is in the other room right now, the eyes can move, I need to put the tongue in. As for Earth Beasts, So I still want to make either a third Earth Beasts video, or from time to time now I’m coming up with these freestyles that are the next evolution in that cycle, nastier, darker – the oceans are acidifying, corals are dying and everything is getting more ferocious. I’m not entirely certain where it’s heading but that part of me that’s routed in the geological history of the earth is alive, there’s a beast under the mountain that people are just shovelling carcasses into and I don’t know what it’s going to do next but it’s getting stronger. It’s in the chrysalis”

Following on from this, Brian and Yugen hint at a potential collaborative video project, but are both understandably reluctant to divulge too much. Part of this is because Yugen and Kanif at the time of the interview were mid-tour, and so completely focused on the live shows and the day-to-day admin of roving from town to town on a shoestring budget. “We were coming out of SA to Europe alone, starting a fresh, not knowing the languages, crashing on people’s couches, house-sitting for strangers – some people in Berlin let us stay in their house for a month looking after their plants just because they’d been to a gig and enjoyed it so much, weird shit like this, adventures, and this conscious awareness that it’s not your space. It took a lot of mental and emotional work to adjust and all that angst was directed into the lyrics, it felt dreamlike, not nightmarish but dark, this fog of emergent self-discovery.” Yugen says. “Audiences have been made receptive whether they heard me first on Black Panther, the new album or anything else, they’re coming away with something new.”

Yugen once commented that she believed that, rather than being dead, hip-hop was in fact, undead, a view she still holds to this day. “So many different things filter into it, from politics to commercialism to anything else you can name and yet it still just trudges on, mutating and finding new freshness in all the dead material – dead rappers, dead philosophers and it keeps recycling and pulling new material to the surface. It’s all a cycle.”. Brian has his own perspective – “The thing that’s the most hip-hop about Yugen and Kaneef’s music is the not giving a fuck. I think the people who say hip-hop is dead are the old guard, the ones who don’t see the same environment when they were trying to survive. This idea of originally and distinct style, that was the currency of golden era hip-hop, which in a way had to become commercial to survive, but that spirit endures.”

Things have calmed down in the wake of the album and the tour, but the significant leap forward made by Yugen and Kanif as a pairing, as well as by Brian in his own right, is significant. The verse on Opps which flung Yugen into the global spotlight is a mere sliver of not only her talent, but a whole convergence of disruptive musical and visual content which has been bubbling up in dark corners all over the world, be they in Africa, Europe, North America or anywhere else. Speaking to Brian again was a timely reminder of that, he’s still building his monstrous world, and not to far away, many more like him are crafting theirs.

You can listen to Anima Mysterium here and find Historian Himself’s work on his website.