Green Hell wants to put you through hell and back — and you're gonna love it. 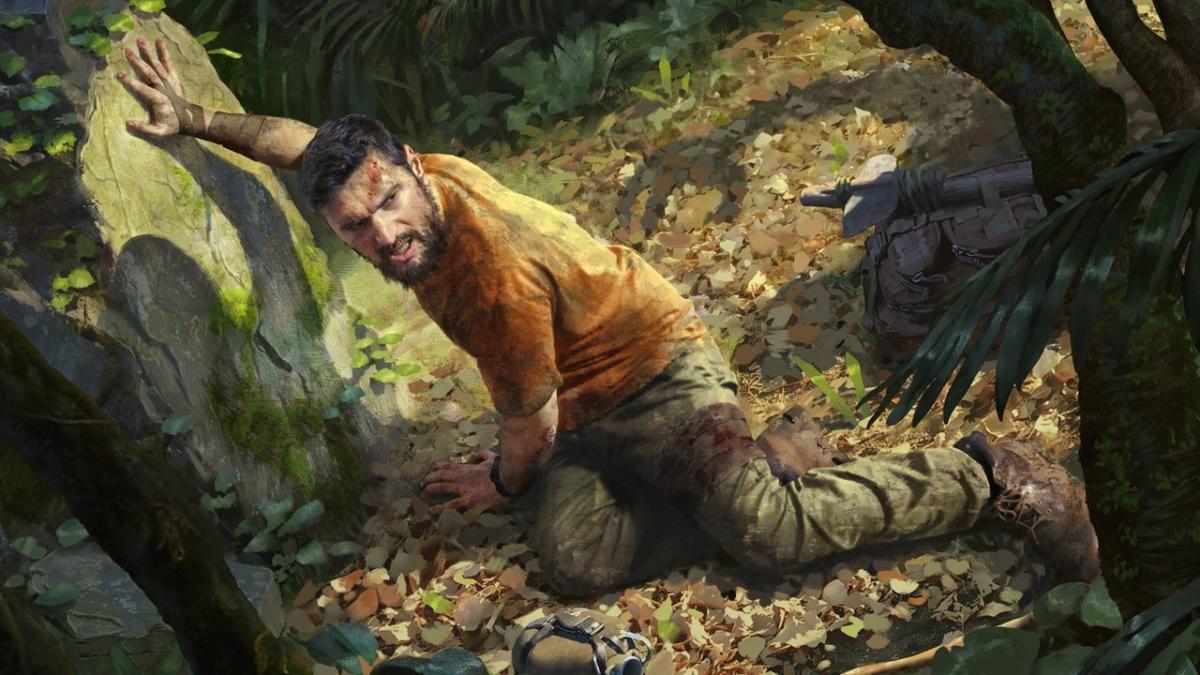 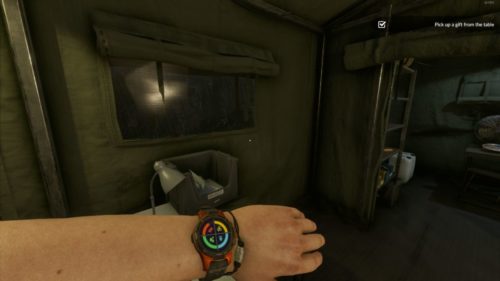 Things weren’t looking too great for Jake Higgins. After I’d guided him through an uncharted area and encountered all manner of obstacles, my HUD was flashing with enough warning symbols to send a power plant into a panic. No bother: I knew what they all were and how to fix them, to bring Jake back from the brink of insanity and stop his limbs from looking some very upsetting shades of green. With a little bit of TLC and a lot of leaves, he was as good as new. And then we walked out of camp by five meters and ended up getting bitten by something, leading Jake to die a very slow and frustrating death. Another lesson learned.

Green Hell is an Early Access graduate that showed plenty of promise from day one. Instantly bringing to mind a more tropical and even more unforgiving version of The Forest, Green Hell promised a mature and deep survival experience with a learning curve far steeper than many of its peers, so much so that it could be called “hardcore”. The insanity mechanics made every step tactical and regularly with anxiety, almost to the point of the game being purely masochistic. With 1.0 and plenty of updates preceding it over the past year, Green Hell has softened the effects of its humid nightmares somewhat, though it’s still more Apocalypto than George of the Jungle. 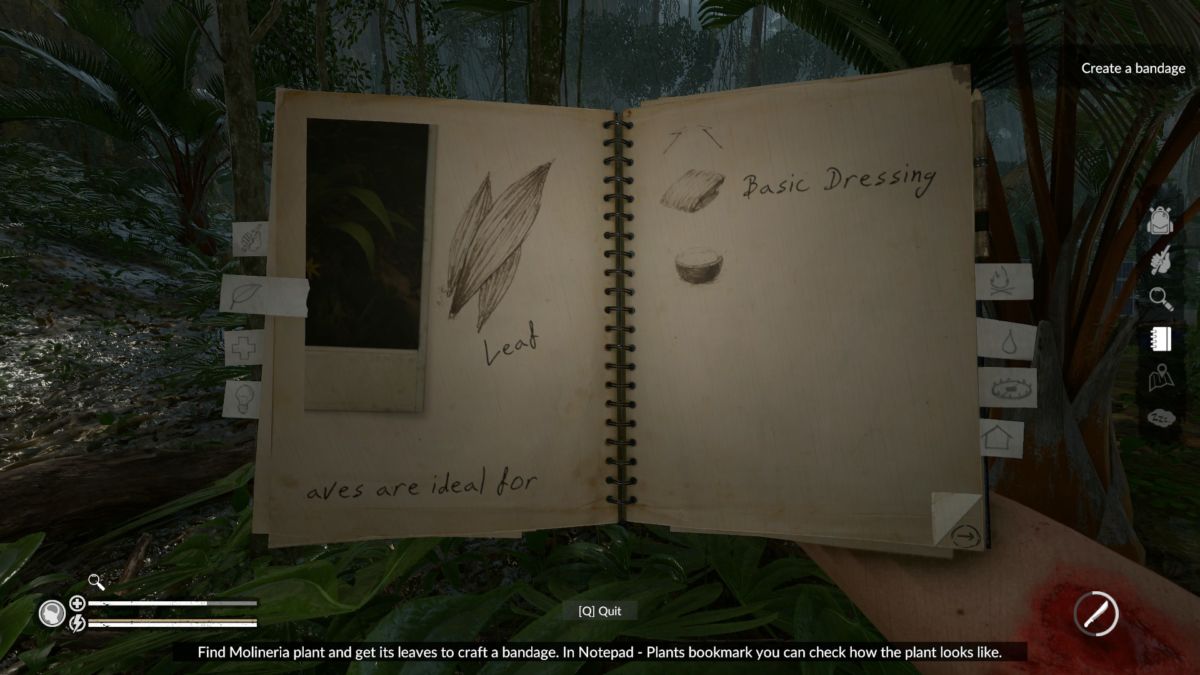 The biggest addition for the full release is the Story mode, which may be the best and most affecting narrative you will ever experience in a survival game. You play as Jake Higgins, a researcher who ventures deep into the Amazon with his wife, Mia, to make contact with a tribe. Before long, the pair are separated and it’s up to you to return Jake to his wife and discover some of the jungle’s mysteries along the way.

To elaborate further on the plot would be to utterly spoil it; I can’t hint at or reveal anything beyond the basic synopsis for fear of letting the cat out of the bag. Just know that you will go through the wringer as you try to get Jake back to the woman he loves, a relationship which is bolstered by some superb voice acting from Brandon Fague and Marta Da Silva that more than holds a candle to the similar walkie-talkie relationship seen in Campo Santo’s Firewatch. It says a lot that I would love to gush about Green Hell’s story, yet I have to refrain as its narrative is something that you should discover all for yourself. Stick with its slow start and you will be engrossed in no time at all. 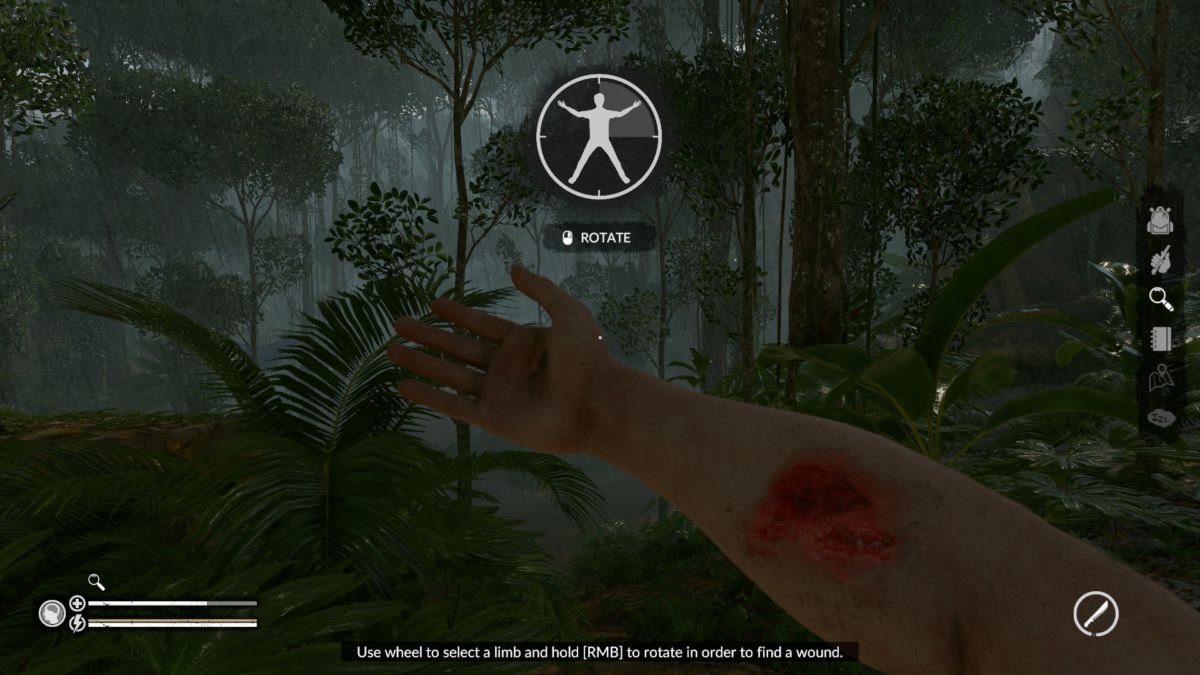 I can, however, detail a small criticism of the game’s ending(s), which comes too abruptly and breaks up the pattern of progression. There are multiple endings to be discovered in Green Hell — I unfortunately seemed to unlock the worst possible one, purely because I wasn’t expecting it and hadn’t yet done something I was planning on getting around to. The “loop” of storyline progression involves you preparing and then using special item, which will eventually grant you a tool to use to further explore Green Hell’s hellscape, and repeat. I followed this set formula for what I didn’t realise was the final passage of the story and was left slightly annoyed as the credits unexpectedly rolled. I had been locked out of meeting the criteria and collecting the item I needed for the ending I thought all my hard work deserved because the game had essentially flipped the script.

Pretty much everything leading up to that disappointment was great, however. Green Hell is a game full of hallelujahs, you discovering things often the hard (and deadly) way until you feel more comfortable living in such an inhospitable world. While I noticed I was getting better at surviving, I never especially felt like I was flourishing, either, which stopped me from getting modest. The second you relax in Green Hell, that’s when the next trauma hits you. 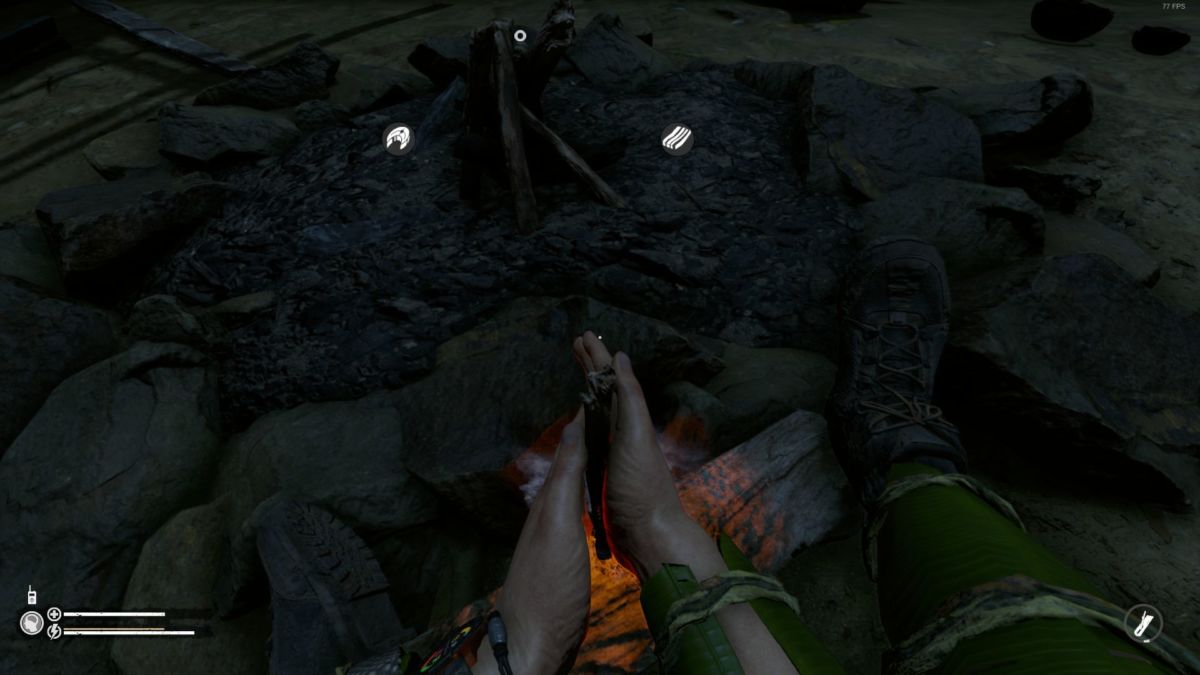 You have to contend with the usual staples of the survival genre — food, water, and sleep — but Green Hell divides them in rather interesting ways. Not only do you have to make sure you eat, but you also have to keep topping up on fats, cabs, and protein to keep your health as pristine as possible. This is easier said than done: finding the right balance is tricky, meaning that you are unlikely to have all meters maxed out at once, which can all be analysed from your watch. This tool also helps you to tell the time (not easy in the crazy climes of the Amazon) and pinpoint your co-ordinates — you’ll come to view the watch as an extra limb.

Finding food and water is rather straightforward, but resources that you can consume and absolutely should not is a different matter altogether. There’s serious trial and error with food as you can easily get poisoned or eat parasites, though you should obviously swerve drinking dirty water unless you’re on the verge of collapse. You can offset its effects by eating specific mushrooms, or avoid the issue entirely by setting up a system of coconuts. This is something you have to discover all on your own, making Green Hell a survival experience that you really have to throw yourself into entirely and expect to make some necessary mistakes along the way. 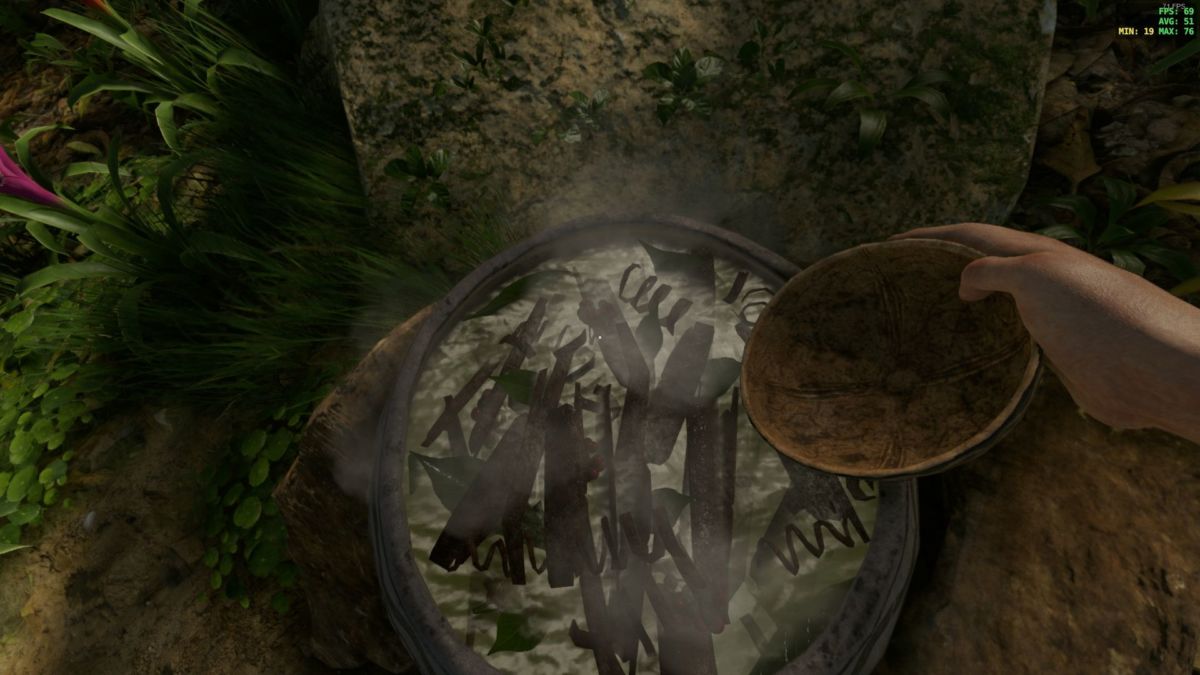 It’s one thing to keep drawing breath in a biome that really wants to stop you from doing so, it’s another thing entirely to have any semblance of a “normal” life. Crafting structures in Green Hell is largely borrowed from The Forest in which you access a notebook and a blueprint before placing down the skeleton of what you want to make. You can craft weapons, healing items and so on just by dragging and dropping the items, which is handy for when you need to make a bandage in a pinch. The UI for this is a little finicky at first, it asking you to go through a wheel that may end up with Jake accidentally going to sleep, but you will likely eventually get used to it.

One of Green Hell’s greatest innovations is that it allows you to inspect Jake limb-by-limb to see what’s ailing him. More often than not, a few leeches will attach to him whenever he is near water. A neat little mechanic sees you picking them off and dragging them away with your mouse, though this quickly gets tiresome and like busywork, ironically leeching the fun out of such a unique spin on survival. Similarly, a bite or sting from the creepy crawlies are like a death sentence in Green Hell, it being very difficult to find the specific herbs you need for an antidote in amongst all of the nearly identical flora. Preparation is key, though it can become a bit of a chore to have to scrounge for X, Y and also Z before you go off on an expedition every time. 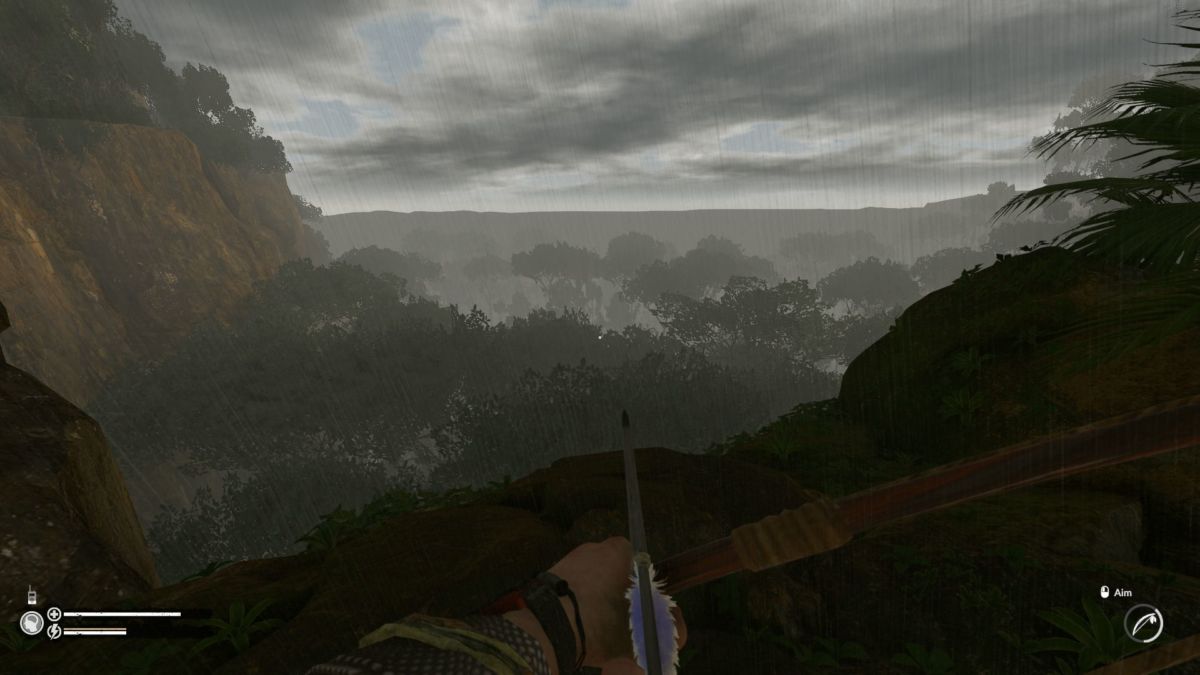 As already mentioned, insanity was dialled up to 100 during the game’s initial builds, but has been tempered significantly. I only ever went Full Metal Jacket once in Green Hell on the normal difficulty after neglecting to address my many flashing icons, which resulted in Jake hallucinating tribal warriors and hearing incredibly creepy voices before dying of madness (I guess?). Doing normal, comforting things will restore your sanity, but expect to go slightly off the deep end if you start eating buckets of maggots.

The trial by fire nature of Green Hell is further complicated by a save system that is bound to back some new players into an inescapable corner. You can only save manually and at certain places, so there’s every chance that you may naively save when you are in desperate need of aid, leading your save to become a dead end as you are basically in a terminal situation. Speaking from experience, having to sit through an unskippable story intro again because I’d saved myself into oblivion sucked me out of the immersion with me having to repeat all the baby steps I’d already taken. A constant autosave would certainly destroy some of the fear factor that’s so compelling about Green Hell, but your progress being autosaved every couple of days or after significant story events would be welcomed. 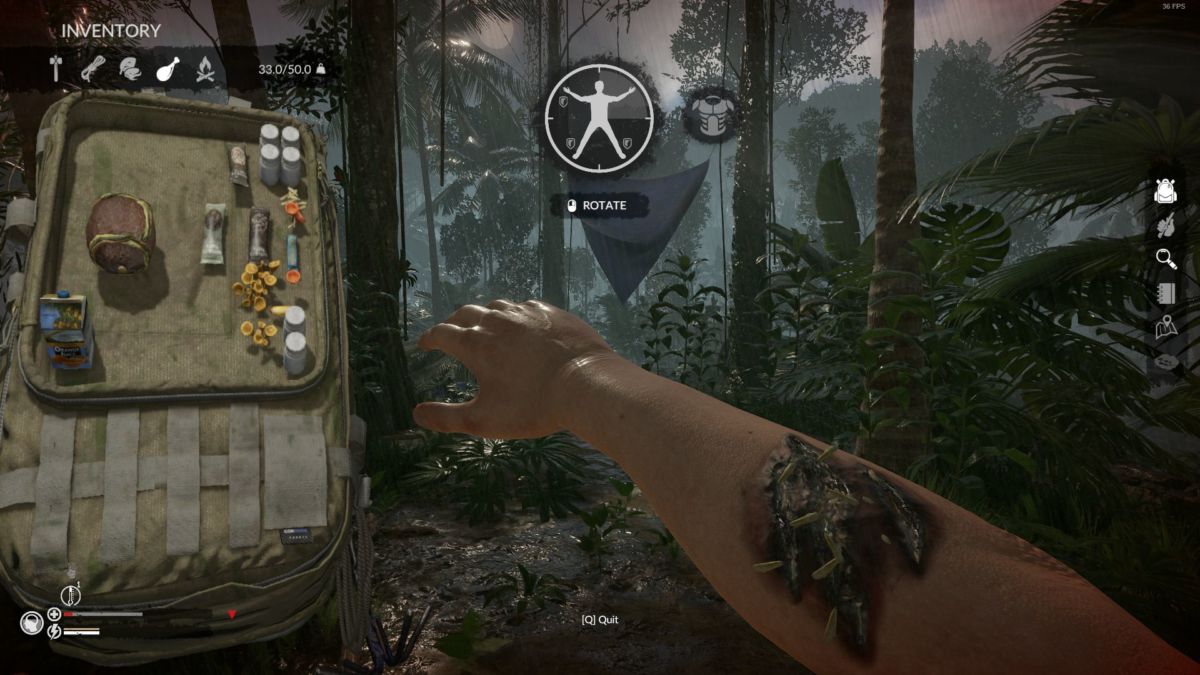 On an i7, 1060, 16 RAM setup, Green Hell is absolutely stunning with each horizon providing a screenshot opportunity and the water reflections looking like they were put through a classy Instagram filter. Character models, Jake’s arms in particular, are impressively detailed and the whole world feels vibrant and alive. This comes at the cost of optimisation, however: Green Hell suffered some fairly regular frame hitches during my playthrough, even after lowering the settings. These hitches aren’t too destructive, though can be slightly annoying when aiming a bow or trying to do something that requires fine movement.

Away from Green Hell’s impressive narrative, the meat and bones survival experience awaits, in which you must simply survive for as long as possible. Away from that, challenges make you race against the clock to put up a campfire or collect a set amount of material. Though the game is hard enough as it is, there’s also a lot of wiggle room to make your Green Hell experience as hellish as you want, or even somewhat heavenly, like a nice stroll in the jungle where you fish and making mud huts for the rest of your days. There are countless hours of content to play through in Green Hell and you will no doubt keep discovering something new with each passing hour.

Though it may provide some irritations, Green Hell certainly joins the elite pantheon of survival games, even if it could be argued that it’s joining a little too late with the genre not enjoying the boom it once was. However, as long as developers like Creepy Jar keep twisting conventions and adding original ideas to the survival genre, there’s no doubt there will be a strong audience for a long time yet.

*A Steam key was provided by PR for the purposes of this review.

Verdict
Green Hell wants to put you through hell and back in an uncompromising and original survival experience with one of the best narratives the genre has ever provided to boot.
8