Sod Ghostbuster, I want to be a Ghostrunner. 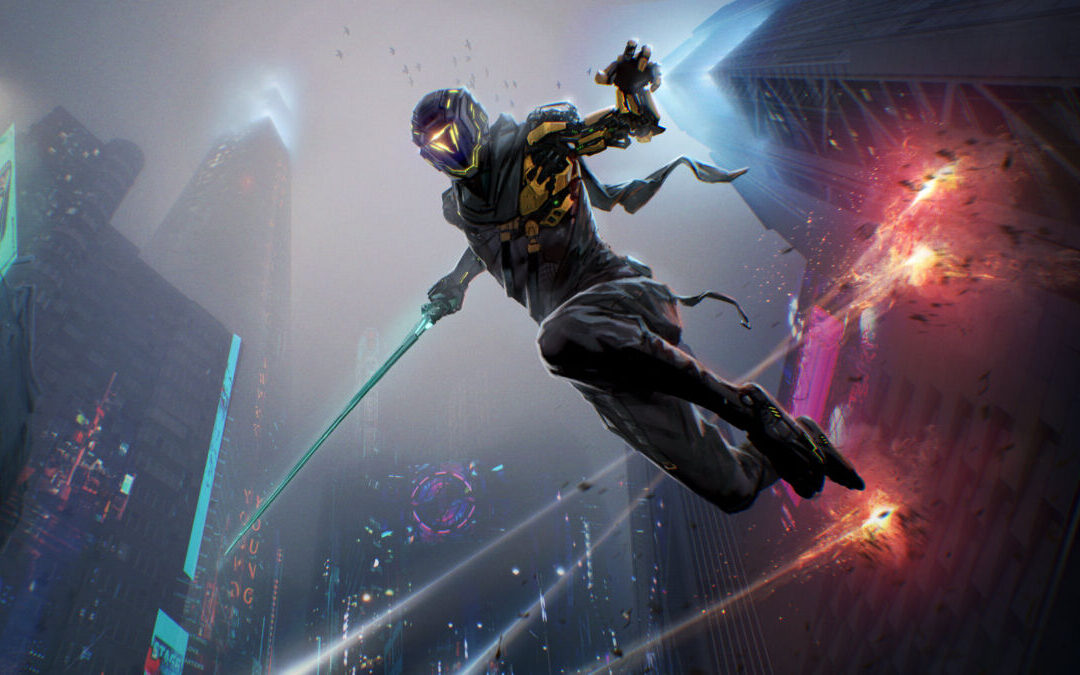 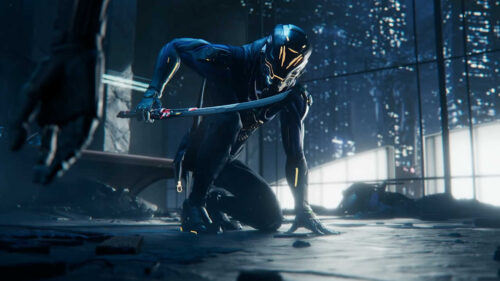 There are some universal truths when it comes to gaming. Playing a ninja is cool, but playing as a cyborg ninja is better. Ghostrunner subscribes to this theory, and quite frankly, it succeeds, becoming one of 2020’s sleeper hits. If you’ve been put off by Cyberpunk 2077’s delay, allow Ghostrunner to close that gap.

Taking place in Dharma Tower, the last bastion of humanity after “The Burst” decimated the planet, you control the titular Ghostrunner as he journeys to the top of the tower to oust the dictator Mara. Along the way, you’ll be aided by Zoe, a human resistance member, and The Architect, the AI voice inside your head.

The plot is serviceable enough, though it’s nothing to write home about. There’s some witty lines and dialogue between the various characters, and the overall narrative touches on traditional cyberpunk themes of what it means to be human. If you upgrade yourself too much, can you even be called human to begin with? It’s decent, but it’s not the reason why you’ll be downloading Ghostrunner: it’s the gameplay.

As a whole, Ghostrunner sits somewhere between Mirror’s Edge and Hotline Miami, which is as awesome as that sounds. For the most part, you’ll be utilising parkour and grappling hooks to traverse the environment, getting you close enough to your enemy for that sweet one hit kill, but you also die in one hit. Fortunately, restarting from a checkpoint is practically instantaneous, meaning you’ll be right back in the thick of it immediately.

In all honesty, this game would likely feel massively better on PC via mouse and keyboard, but Ghostrunner still plays surprisingly well with a controller. By default, jump is mapped to the right bumper, meaning you can still get aerial without pulling focus from other tasks like aiming and your abilities. Dodge is mapped to the left bumper too, so you can still aim while you’re trying to avoid getting shot. While in the air, dodging will briefly slow down time, letting you avoid projectiles easier.

Encounters feel more like puzzle-solving than anything, as you’ll likely spend a couple of deaths per fight memorising enemy placements and figuring out the best way to move through the environment like a force of nature. Unlike DOOM, where you overwhelm opponents with raw power, Ghostrunner is more comparable to surgery, with sharp and precise strikes. Running in, swinging your katana around like a Dynasty Warriors character will only lead to ruin. As fast-paced as Ghostrunner is, the game promotes careful strategy and execution to succeed.

Once you finally do nail that perfect fight, Ghostrunner is absolutely sublime, especially after particularly challenging fights that take dozens of tries. Leaping off walls to slice an enemy from above, dodging out the way of the next guy’s shots only to carve him into pieces before lunging at the last enemy; Ghostrunner at its best is a highlight reel of incredible kills and moments that make you feel like a complete badass. While the approaches are different, it still retains that DOOM feeling of being able to conquer everything in front of you. Also, the soundtrack from Daniel Deluxe slaps. There’s another comparison for you.

Still, there’s a lot to contend with before you can sample the taste of victory, first among them being your enemies. In the beginning, you’ll just be contending with simple guards with pistols, but soon the stakes get raised with assault rifles, snipers, some melee fighters, robots and more. There’s plenty to sink your teeth into, but Ghostrunner mercifully dripfeeds these new threats to you in combat. You’ll encounter them on their own first before they become deeply embedded in encounters, giving you time to adopt strategies to use later on.

Most of the enemies are pretty balanced, though the shield enemies will give you a run for your money for a while. Once you realise you can air dodge near them to exploit their flank and kill them, they become much easier to deal with. There are, however, two late game enemies that are more frustrating than most. One can teleport and fire fast moving projectiles at you, while the other explodes if they get near, making it hard to deal with other enemies and challenges.

You also have four abilities which you earn over the course of the game that are triggered by using the d-pad to select the one you want and clicking the left stick. These range from Tempest, which is a short range palm strike that can blast multiple enemies and block projectiles, Surge, which is a projectile strike of your own, and Overlord, which hacks enemies to fight for you. However, the first one, Blink, is the most versatile, allowing you to teleport to enemies for the kill, through projectiles and other enemies to boot.

As you progress through the game, you’ll even unlock upgrades that can be used to improve your core abilities. Applying upgrades involves a Tetris-like mini-game as you try to place block shapes on a grid, utilising the space in the most efficient way possible. You’ll unlock upgrades that include more dashes, the ability to use Blink twice in quick succession and so much more, meaning you’ll be able to find a loadout that works best for you.

There are a couple of issues with the overall game, with one of the bigger ones being the UI. On certain TVs, the text is often too small in the menus, and the objective markers are so tiny that they’ll likely be a nightmare for those with sight accessibility issues, so you might have to be careful with the type of set-up you’re running.

The parkour sections, particularly during the last few levels, can be super frustrating, as they require perfect movement and execution in order to succeed, but at least there’s no loading screens to make the experience more of a chore to complete. Those last few levels are also where the game tends to chug a bit more, dropping frames during some more climactic encounters.

Ghostrunner is the perfect example of a simple premise executed brilliantly, nailing the rush of becoming the cyberpunk genre’s most fearsome cyborg ninja. Sure, it has a singular focus and appeal, but as a smaller release, it stands shoulder to shoulder with this year’s biggest offerings.

An Xbox One code was provided by PR for the purposes of this review. 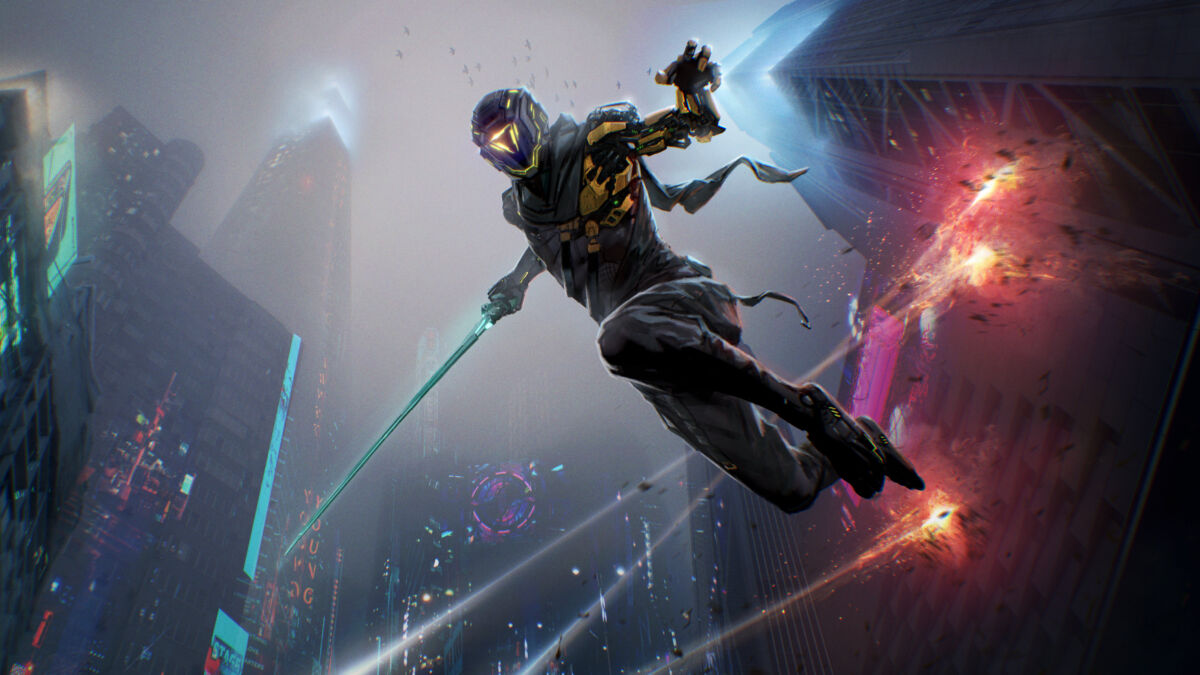 Verdict
Ghostrunner’s fusion of parkour and one-hit kill gameplay makes for a challenging but brilliant experience worth checking out.
8
Cultured Vultures is a pop culture website established in 2013 covering all things gaming, movies, and more. We eat your words.
All The News On The Biggest Games