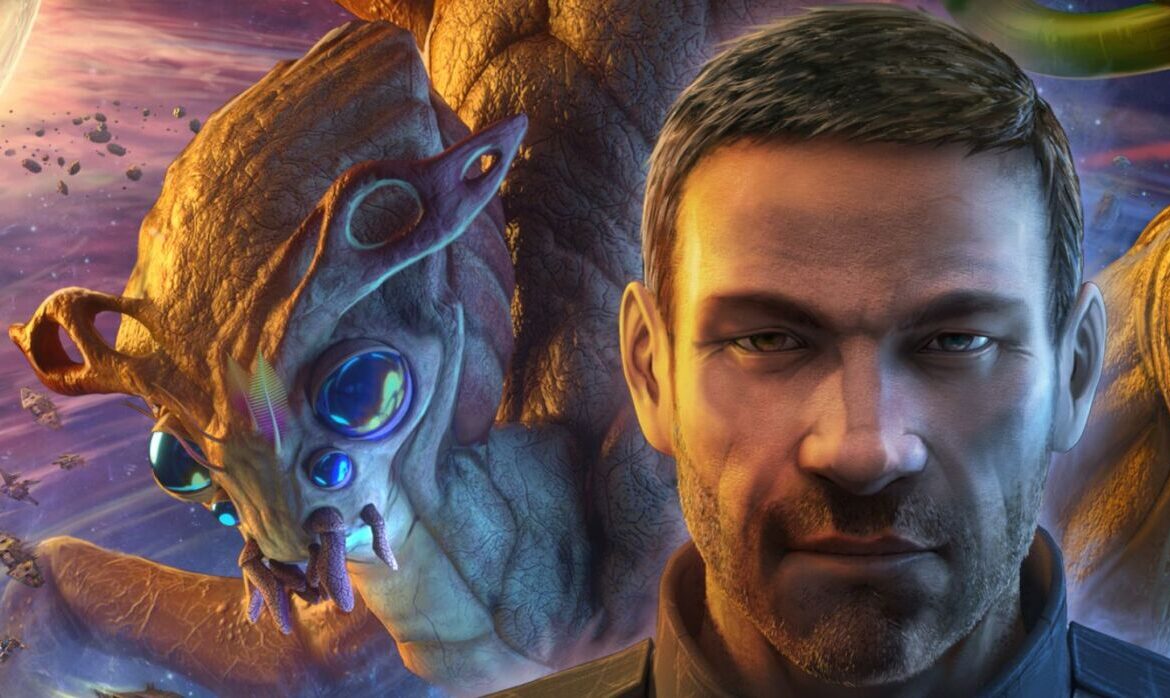 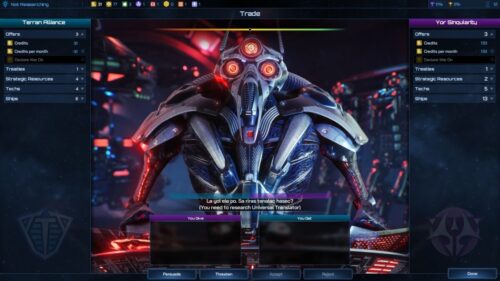 Galactic Civilizations 4 is a turn-based hex-based 4X strategy game in the truest sense. Players can expect to colonize planets, explore the mysteries of the galaxy, engage in interstellar conflict, and deal with competing powers to become the most influential and prestigious space-faring civilization.

You can experience the grand strategy action in single-player and multiplayer modes. Stardock has clearly doubled down on the sandbox nature of this type of game, opting to go solely with an open-ended campaign mode that’s absolutely stacked with customization options. However, it’s the single-player mode where players will have the most amount of control to tailor the experience to their liking.

The Galactic Civilizations series has always had a distinct visual style and the fourth game in the series continues this tradition with a bright visual style, inspired alien civilization designs, and consistent art direction. Mainly, the strategic view of the map is readable and understandable, though it can get quite busy in later stages of the game and when viewed from a zoomed-out angle. The audio is quite solid as well, evoking feelings of wonder that easily put you in the midst of an ongoing space opera, a la Star Wars or Star Trek.

However, it’s the gameplay that warrants the most amount of discussion, as Galactic Civilizations 4 has three major standouts.

The first is the absolutely incredible and breath-taking scale at which the action occurs that rivals other sci-fi 4X strategy games like Stellaris. This can be seen in the game’s sector system where multiple sections of the Milky Way galaxy all connect through vital transport nodes. Essentially, the sector system opens up the possibility for a grand strategy experience that can occur across multiple theaters in different corners of the galaxy for an absolutely dizzying space opera romp.

In parallel with the increased scale, the developers at Stardock have stuffed their game with a ton of mechanics, creating a rich strategic experience. Of particular note are the expanded ideology system and the introduction of characters into the series.

The Ideology system is no longer a simple choice between three major trees, but instead is now split into seven categories, each with two separate paths, giving players unparalleled customization and granularity in defining their civilization’s philosophy. The character system also adds levels of role-playing for emergent storytelling opportunities, as well as more options for micromanagement and min-maxing for players exploring optimal paths towards success.

In addition, the developers added some more options for direct influence on the map with the Executive Orders and Artifacts active ability systems. These give players even more options for granular control that both enrich the universe and simply deepen the strategic gameplay.

The sheer amount of systems can easily give the game an intimidating presence and can feel overwhelming and it’s quite unfortunate that it lacks a dedicated tutorial to help players ease into this gargantuan game. Luckily, once you get over the initial hurdle of intimidation and learning the mechanics, the game has a comfortable flow and simple controls, which will let you spend more time on decision-making than on fighting the game.

Another highlight is Galactic Civilizations’ AI. On normal or even lower difficulties, the AI empires act refreshingly aggressive and can easily keep up or even outpace players in their efforts to become the most powerful civilization. This quality is especially of note since many 4X strategy games struggle with AI that can really only challenge the player through unbalanced gameplay rather than effectively programmed behavior or decision-making.

The AI’s quality can best be seen in its approach to interstellar warfare and maneuvering, taking advantage of the porous nature of space combat by poking, proding, and harassing the player’s open areas and weak spots. Granted, the AI’s aggression can, over time, become predictable and oftentimes leaves its territory vulnerable to counterattacks. Unfortunately, the AI’s quality falters a bit in diplomacy where its bullishness leads it to offer absurd and unreasonable trades and treaties that can disincentivize you from engaging with diplomacy altogether.

Perhaps Galactic Civilizations 4’s biggest success is capturing the feel and the strategic potential of playing as a faction on a truly cosmic scale. There’s always something going on, some detail to analyze, or a weak point to shore up, and not just in a single sector of space, but in multiple areas at the same time.

Though Galactic Civilizations 4 is undoubtedly engaging and impressive in the steps it has taken to, quite literally, expand the series, the game has a number of core issues that make it a flawed, albeit fun, epic strategy experience. The incredible scale is a double-edged sword that accentuates the tension between macro-management on such a scale and systems of micromanagement. In other words, by expanding the size of their game, not all management systems gel well together.

This struggle leads to uneven pacing throughout the game, especially depending on the chosen size of play space in a campaign, as well as the inevitable repetitive grind that many 4X games struggle with. There are certainly improvements and interesting ideas to alleviate some of the grind, such as dividing planets into Core Worlds and Colony Worlds, but there aren’t quite enough systemic additions or feature developments to make the experience more seamless. The touted Galactic Challenges system that aims to give players more options to limit the grind and give them more control over how the game ends isn’t balanced well enough to hit the mark.

This conflicting relation between macro and micromanagement is only made worse by the mixed UI. While it’s certainly better than its predecessors, it’s still too fiddly and doesn’t provide information and filter tools for players to find important information. The fleet management panel is a particular nightmare, especially in the latter stages of a campaign or when two big civilizations go to war.

The second major problem that keeps Galactic Civilizations 4 from greatness is an underlying feeling of soullessness in the gameplay. It’s commendable that the developers have done their best to add more flavor and story-telling potential to the series, though there’s still a nagging feeling of the game being a bland spreadsheet strategy game.

This soullessness can be best seen in the game’s approach to decision-making and combat. There are few choices and decisions that players make that are objectively ineffective or at least challenge players with significant opportunity costs or empire-wide effects. Essentially, most decisions are just different gradations of positive impact, which themselves do little to indicate their effect on your progress.

This leads to many decisions losing meaning because no matter what a player does, there will usually be some positive outcome — there aren’t many repercussions to thoughtless decision-making.

The features that stick out like a sore thumb the most are the ship designer and combat. The physical and practical design of a ship has little impact on its performance in combat, aside from the values and numbers changed from the modules you strap to the ship.

You can easily create a simple box with a bunch of modules attached to it and call it a day and have it function exactly the same as a ship that’s been meticulously designed and customized. Sure, this system adds role-playing potential, but it’s not incentivized and has little impact on actual gameplay.

The lack of a meaningful interactive tactical combat system is a huge letdown and missed opportunity and reinforces the fact that ships, one of the most exciting elements of sci-fi, are just a collection of numbers and stats with little personality. More importantly, the lack of a robust combat system goes against three major elements that the game clearly prides itself on.

First, the game doesn’t take full advantage of its solid graphics, stunning art direction, and cool ship designs, though the battle viewer does make up for this a little bit. Second, player decision-making is limited around arguably one of the most important elements of the game: ships, fleets, and using them to carry out your will, so they lose all personality and they might as well not even be modeled.

Finally, the lack of combat stifles Galactic Civilizations’ role-playing potential, something the developers have clearly tried to focus on this time around. Battles are perfect moments for climactic emergent story-telling and role-play, as well as adding dynamism to the overall strategy experience.

From a technical standpoint, Galactic Civilizations 4 has a relatively sparse graphics section, especially given its overall focus on visuals, though the rest of the customization options are solid. The game ran smoothly even when the screen got busy, so if you meet recommended settings you should encounter few problems, though if you want to experience the game at its absolute maximum potential, you’ll need some serious RAM hardware to run it.

I didn’t come across any crashes, though for bugs I occasionally encountered a visual bug in the battle viewer where some ships don’t appear or spawn at all. Also, some buttons, like the “Go to Location” button for ongoing missions, seemed to not do anything.

When all’s said and done, Galactic Civilizations 4 is undoubtedly a fun, engaging, and impressive 4X strategy game, with its scale alone worth the asking price. It also succeeds in building upon its predecessors with new systems and mechanics, while expanding upon older features, like Ideology.

An EGS key was provided by PR for the purposes of this review. 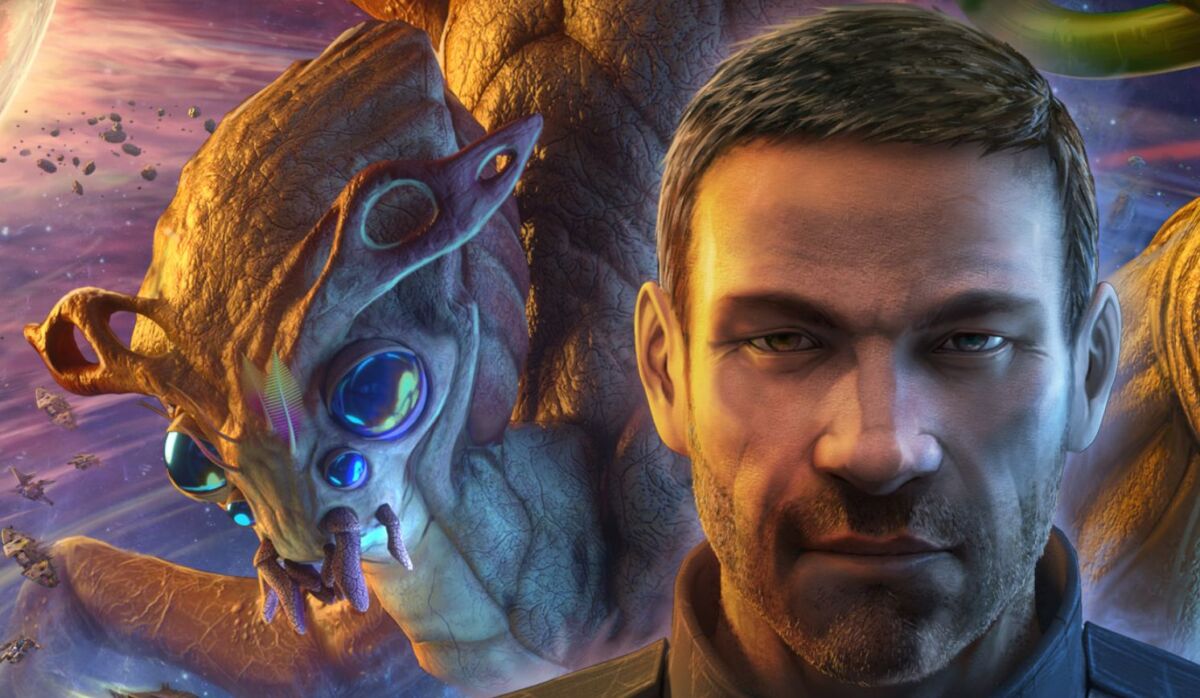 Verdict
Though it maintains some serious design flaws carried over from its predecessors, Galactic Civilizations 4 is an epic grand strategy game on a truly galactic scale.
7.5
Cultured Vultures is a pop culture website established in 2013 covering all things gaming, movies, and more. We eat your words.
All The News On The Biggest Games