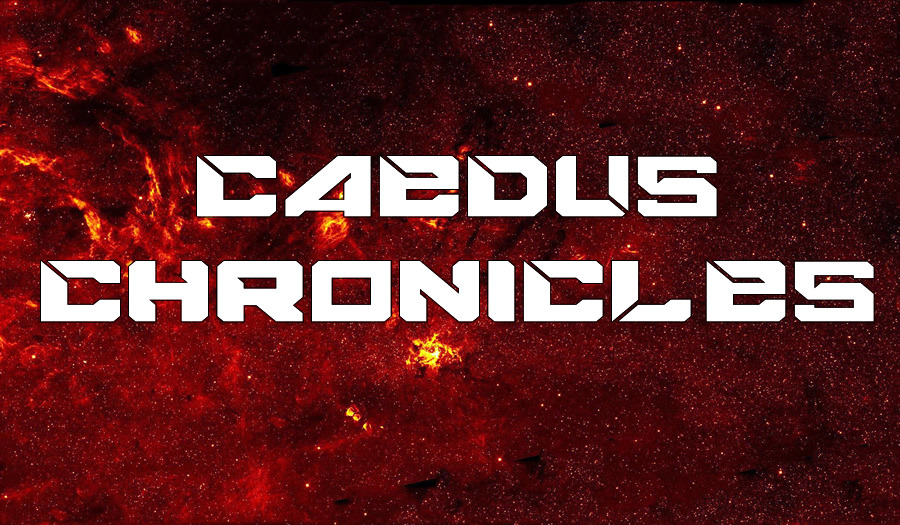 The emergency strip lights along the wall throbbed with a dull, barely luminescent light, bathing the hangar in a diseased glow. Untold cycles of dormancy had left its mark on the satellite geo-synced with the mining planet, but its dormancy was the very factor that brought it to the forefront of Caedus’ search.

His wrist display screen was flashing wildly, registering breathable air and a litany of other useful infobits scavenged from the remnants of the satellites wireless net. A few finger movements and a message rolled past on his screen, clearing him to continue his operations.

As the air lock cycled through pressure equalization, Caedus’ mind wandered onto his deployment. Why did the Starburst Conglomerate want this humanoid captured, not erased like all the other defectors from StarCon’s R&D?

What really got Caedus’ mind spinning was the subject itself. It had no known enhancements or implants, not even a drop of meta mutation nor telekinetic capability. This triggered a deep warning resonance within his subconscious, grinding away at his certainty. Something was wrong here, his mind pushing furiously for him to accept something that simply didn’t compute. This needed to be worked through before the op went live; an analysis was required. Delving into his mind, Caedus slowed his perception and stimulus intake, increasing his mental processing ability.

Starting with his first point of intrigue back at Echelon High Command; he had received orders through the net to place his requisition order and report to the briefing for operation objectives. This blindsided Caedus: such a blatant violation of S.O.P, ordering equipment before he even knew the classification of his operation. Caedus responded to this contemptible demand with a requisition chit that defied belief, a variable cornucopia that would cost more resources than an average citizen would see in a lifetime. His choice of equipment, flight module, everything down to his active meta functions were chosen from the highest available tiers of StarCon R&D, expecting his briefing to include a new edit of his equipment chit. His briefing supplied little information on the humanoid subject, with such a lack of combat skills this mission earned a Denra rank, the lowest completion requirements of any operation standard. So why had his requisition orders of Azura rank resources, including particle beam weapons, stealth fields and genetic enhancements been granted, to this Denra operation?

This contradiction would certainly require further delving, considering the flaw it suggested in his analysis capabilities with something that should have been painfully obvious. And yet there was still something he refused to accept, a nagging itch inside himself that he could not acknowledge.

Caedus was now certain of two things: this unknown humanoid had something the StarCon Echelon demanded and that he was horribly, dangerously uninformed about what to expect.

Four sharp beeps through his comm-net and the airlock opened, exposing the sickly glow of faulty strip lighting. Caedus descended to the flight deck, drawing his rail pistol as he climbed out of his module. Breathing deeply, he surveyed his surroundings for any sign of activity. With a mental command his enhancements flared into life, leaving him stunned as the hardware whirled up.

Caedus waited for the V.I’s response.

A flat, static voice replied “All systems are green, no access points here but, according to schematics, there’s some sort of information hub.”

As his vision phased from the standard visible spectrum to low light, Caedus purposefully unfocused his eyes to check the map/radar overlay.

According to his map Caedus would have to access the repulsor lift to reach the mid deck. Once he located the info hub, he’d have his V.I upload into the system and help him complete this op. Caedus set off towards the repulsor tubes with a steady stride, weapon raised and senses ablaze.

Reaching the entrance of the lift was a short walk, but as Caedus observed his surroundings there was little doubt that the lift would be anywhere near serviceable. The blaster scores on the walls and scattered piles of slag suggested some sort of pulse weapon was used, possibly against boarders. V.I confirmed the pulse fire originated from what was once the lift chamber. More facts that just didn’t compute. Pulse fire generated huge amounts of heat, so firing it in the confined lift chamber would be tantamount to suicide but obviously the defender had survived, as sweeping burns continued throughout the hangar deck.

“V.I, what could survive that kind of heat, any specific species or public mutations?”

“No public mutations available through StarCon, only Echelon commanders have these resources,” V.I replied.

A swift input on his wrist display set up of a contra-gravity field, so that with a step and a jump he was floating within the hollow lift tube. As Caedus looked up he saw the entrance to the mid deck, locked onto the ledge and fired a magnetic grapnel line, allowing him to safely ascend onto the next level. Stepping out onto the mid-level his stasis field switched off, dropping him to his feet once more.

“Mid-deck reached, lead me to the info hub V.I, time log and store.”

As Caedus checked the internal map and began his route to the hub, his wrist display started blinking fast, his armour deployed gas filters and a warning of multiple radar pings.

“Detection sensors have identified a pathogen of unknown origin”

“I am merely a virtual interpreter, conveying computations gathered from the armors sensors along with StarCon datadrives, I have not overlooked a single byte of available data”

“This is not the time to play technicalities with me; you’re getting a tune up once this is done”

Caedus needed to delve once more to see what was really going on here, because the information he received stated this was a dead zone, uninhabitable with no native species or original carry overs within the satellites environment. Everything he had been told about this operation and its pertaining details were obviously cycles out, suggesting almost purposeful deception in his brief. The group of Organics on mid deck had forged together into a horde, pushing all other thoughts from Caedus, focusing him to get ready for the surge of whatever it was that was approaching him.

“I need combat tracking on the radar pings and engagement protocol, NOW!”

“Confirmed, combat parameters are all access, no restrictions on engagement.”