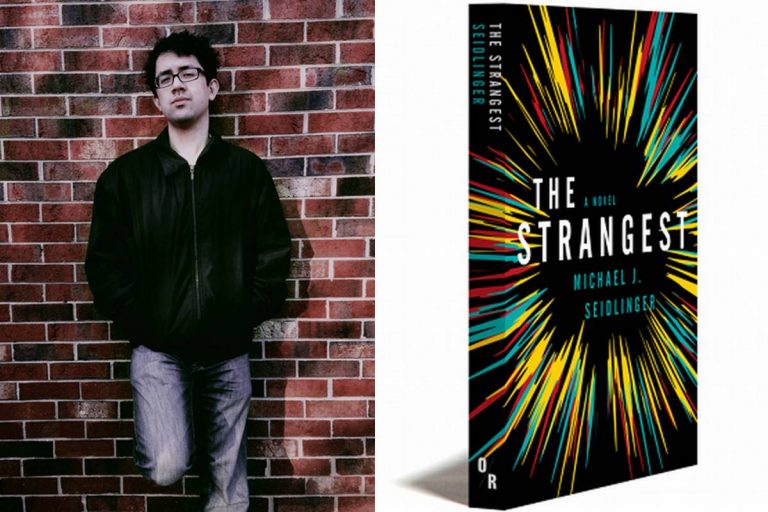 Acting as a modern day retelling of Camus’ The Stranger, Michael J. Seidlinger’s The Strangest is a wild ride into what it means to be human and connected in the 21st century, and how debatable those terms are.

Zachary is our protagonist. He takes us through the anxieties that come with being a human in the 21st century. This can range from the exhausting and claustrophobic experience of interacting with other people, to the worry that we will miss out on a life changing event by not having our phones charged. Zachary runs social a social media account for an online persona that he puts his thoughts out to his followers. Following a meeting with somebody in a bar, Zachary’s life turns into chaos.

Seidlinger’s tale works as a reimagining of the classic. Though the novel reads delightfully and works as a standalone tale, so fans who are not familiar with the classic novel will easily find something fantastic in these pages.

The author’s real talent here is portraying social media as it truly is – people trying to fight the feeling of loneliness. What can usually be considered eye rolling and cliché is instead used powerfully. The novel engages with a reader by connecting with the universal human condition, but instead of focusing on love, it focuses on fear and anxiety. It’s a novel that boils past the foundation and digs its claws into the core of the feelings we worry about, the feelings that we often grab a drink to dull the pain and pretend aren’t real.

The novel kicks into its best form once Zachary’s life comes crashing down on him. Seidlinger is then left with lots of existential questions to answer. Luckily, these don’t get deflected, nor do they get big general sweeping answers, but they are discussed. The novel bounces back and forth between wonderfully written and providing answers to the questions that people are afraid to ask. Ultimately, with The Strangest, Seidlinger may have not just written his best work yet, but proven that in an industry lacking originality, even works that do spin off others can be bursting with so much promise and talent that we want this strange to become familiar.

Seidlinger has written one of the most interesting novels about the lack of identity in the 21st century for a long time. It’s a novel that’s uncompromising with its ambition, and there’s no reason it should be. What could have been a gamble turns out to be a grand success, and Seidlinger shows that he’s not just causing waves in the indie lit scene, but any lit scene.