12 Things That Will Happen At Wrestlemania 32 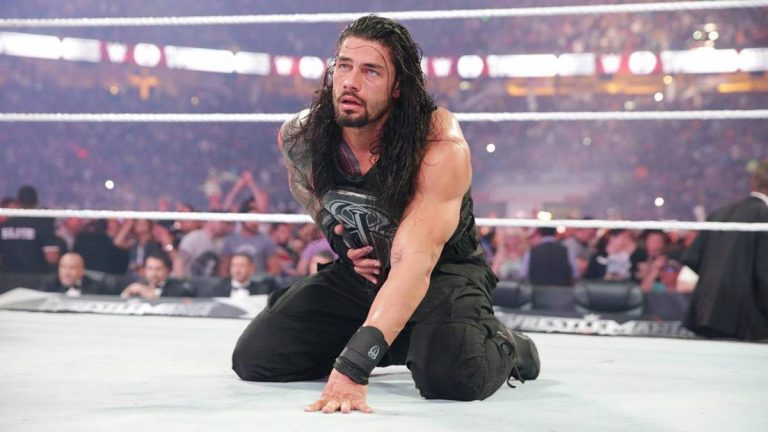 This past Sunday saw WWE’s final pay-per-view event before their biggest, flabbiest, show of the year: Wrestlemania. In roughly a month and a half’s time, a crowd will gather at AT&T Arena in Dallas, Texas expecting to be entertained.

What will they see? It’s the multi-million dollar question, and if WWE get things wrong, it’s another 365 days before they get the same number of eyes on their show again. This year’s match card is already taking shape, spotlighting its ‘top’ stars and highest stakes.

The main event will see WWE executive Triple H defend his world title against the man Vince McMahon desperately wants to be his top star: Roman Reigns. Meanwhile, other big performers like Dean Ambrose, Brock Lesnar and A.J. Styles will also have marquee matches, not to mention the women’s division and tag team champions The New Day.

If you’re planning to watch the event and want to be surprised, stop reading now. Our predictions are so accurate they’ll ruin the whole show for you. If you’re still reading, you have been warned:

If you don’t know wrestling terminology, a ‘heel’ is a bad guy and a ‘face’ is a good guy. Right now Big Show is a good guy, most recently teaming with Kane and Ryback to defeat the luckless Wyatt family. Thing is, Big Show turns good and bad with such regularity that these days it’s the closest thing he has to a gimmick. At Wrestlemania Big Show will turn bad again, joining the Wyatt family in the process. Expect future heel and face turns on a regular monthly basis.

2. The Wyatt Family will lose. Again.

It’s become something of a cliché that the Wyatts, led by the creeptastic Bray Wyatt, are portrayed as dangerous and formidable in WWE, but can’t win a match to save their beards. After being defeated at Fast Lane by a pair of ageing afterthoughts and a glorified jobber, you can bet the Wyatt Family will find their way onto the Wrestlemania card, and you can put money on them losing.

3. The crowd will take over the show

It’s become something of a tradition for live crowds to hijack the show in the run up to Wrestlemania when they’re not getting what they want. Right now, hardcore fans are most definitely not getting what they want. Vince McMahon’s pet project Roman Reigns has been roundly rejected by fans despite two years of beneficial booking. After weeks of unfriendly crowds (upcoming shows will play to some of the most rowdy wrestling cities in America) Wrestlemania‘s live audience will feel confident and righteous in taking over the show with chants that make or break matches and careers.

4. In front of the hardcore crowd, the Divas Revolution will have its crowning moment

The Divas Revolution has hit something of a snag in recent months, largely due to incompetent booking from the WWE creative team. Fortunately, the current crop of female performers WWE has on its roster are the real deal. Current Divas Champ Charlotte (Flair, son of Ric) will likely go up against one or both of Sasha Banks and Becky Lynch. The three women will put on a performance that will finally find an appreciative audience of diehard fans.

Following on from his heel turn earlier in the night, Big Show will turn into a good guy once again before the show goes off air. His brief stint as part of the Wyatt Family will end when he chokeslams Bray through a table. Expect Show to subsequently change his mind again the following night on Raw.

6. Shane McMahon will be pounded into mincemeat by The Undertaker

Look at you all, with your crazy notion that Shane McMahon is back to save us all from Vince’s bad storylines and his obsession with Roman Reigns. With Shane O’Mac returning as a kind of champion to the fans, calling out all that’s wrong with WWE right now, some overly optimistic viewers think this heralds a new direction for the company. When Shane is tossed around by the Phenom like a ragdoll, it will be his father’s ultimate middle finger to the hardcore wrestling fans that have had the temerity to reject his best laid plans.

7. A.J. Styles will take on Kevin Owens in the best match of the night

Since A.J. Styles made his WWE debut at the Royal Rumble, the global wrestling veteran has slowly earned the attention of casual fans who didn’t know who he was. A feud with Chris Jericho has delivered three excellent matches, but his Mania match looks set to be against another star who earned his name outside WWE. Kevin Owens will defend his Intercontinental Championship against A.J. Styles and it will be a match of the year candidate.

8. Dean Ambrose and Brock Lesnar will have the most popular match of the night

There’s no way to navigate round it: Dean Ambrose is the most popular wrestler in the company right now. Fans are behind him, and only become more so every time he’s passed over in favour of his buddy Roman Reigns. With the story that’s been told between Ambrose and Lesnar in the last month not even WWE were stupid enough to ignore this as a Wrestlemania match. The Beast versus the Lunatic Fringe is now confirmed, and it might well get the biggest pop of the night. The crowd will preordain this as their fight, and Lesnar and Ambrose will tell a compelling story with a satisfying finish.

9. The Rock will not compete

Wrestling legend Dwayne ‘The Rock’ Johnson is scheduled to make a special appearance at Wrestlemania 32, but don’t expect him to gear up for a match. The Rock will be there for added star power, perhaps dusting off one of his special moves – nothing more. In the middle of shooting Baywatch, Johnson is not about to risk an injury that would halt filming. There’s Hollywood level money involved here, so don’t get any ideas.

It’ll be the most foolish Wrestlemania finish of all time, but Roman Reigns will walk out of the AT&T Arena as World Champion. It’s been on the cards for nearly two years: Vince McMahon has decreed Reigns is his next top star and, darn it, he’s not about to change his mind just because it’s what his customers want. Reigns will defeat Triple H in the final match of the night, holding up the belt as confetti tumbles from the ceiling.

Not so fast though.

Boo! Hiss. Get used to it because the kind of wrestling fan hardcore enough to fly halfway round the world to see a wrestling show is not the kind of fan ready to cheer Roman Reigns. As soon as the main event kicks off it will see a chorus of boos follow Reigns’ every move. All this will culminate in a crescendo of jeering when Roman Reigns finally gets the one-two-three and collects his Wrestlemania moment. It’s suddenly going to be very lonely for the former Shield member as things go off air.

12. Vince McMahon will be so angry he’ll suspend the WWE Universe

When the Chairman of the WWE board hears his new golden boy getting booed out of the building, he’ll have steam blowing out of his ears. After flagrantly embarrassing him on live television, not to mention ruining a relentless two year push for Reigns, Vince McMahon will have no choice but to suspend the WWE Universe for 90 days.

After being talked down by Triple H and his daughter Stephanie, Vince will reluctantly agree to reduce this suspension to 60 days. For the two months following Wrestlemania all WWE live events  will perform to empty arenas, except for Vince McMahon and a cassette player playing canned crowd reaction.