It's the Battle of Winterfell, so spoiler alert: death racks up a lot more points than sex this episode. 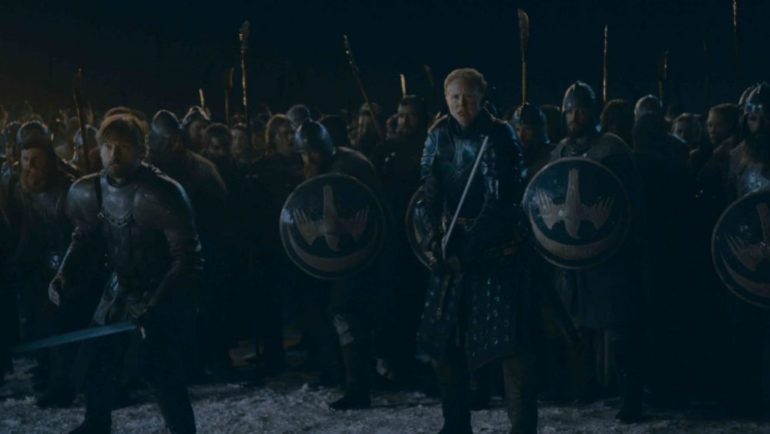 After the first and second episodes of this final season turned out quite so sedate – a disaster for stats based entirely on gratuitous, blood-pumping action – with ‘The Long Night‘ and the Battle of Winterfell, we finally, finally get something on the apocalyptic scale that the show’s been promising since episode one. It’s the middle of the night, the wind’s getting up, and the army of the dead’s coming out of the dark, so let’s get right into it.

Far too many to count. Naturally most of the deaths are nameless extras, with seemingly all the Dothraki and Unsullied used as cannon fodder. To be fair, though, even with Thrones’s sizable cast, if they made every casualty a named character we’d run out. So, just to keep things practical, let’s focus on those who turn up in the opening credits.

Martyrdom bonus: little Lady Mormont, in the face of being physically eaten, icing an undead giant. Muddying the waters slightly is the fact she briefly comes back as a wight, but it seems unfair to blame her for that.

Sacrificial lamb bonus: Beric Dondarrion, blocking the corridor as the wights stab the hell out of him and creating a picture-perfect Christ pose. Unfortunately I have to ding him for magically going from this, to successfully escaping with the people his death was meant to be buying time for.

Redemption arc bonus: Theon, who has Bran literally spell out that yes, he has now redeemed himself. And while this wasn’t how he died, I’d like to put in an argument for him to get a ‘when all you have is a hammer’ bonus, for realising he’s out of arrows and immediately whacking the nearest wight with his bow.

Jenga bonus: Arya takes out the load-bearing baddy, and racks up a kill count too large to fit onscreen at once – impressive even for an already-prolific murderer.

‘You have outlived your usefulness’ bonus: a very, very rare self-inflicted instance of this, when Melisandre, her job done, simply walks off into the snow. This is also a similarly rare instance of death by old age.

What’s surprising is those who didn’t die. Brienne being knighted last week seemed like an obvious ‘one day before retirement’ signifier, ditto Grey Worm and Missandei talking about moving to Naath when this is all over. Likewise, everyone’s insistence the crypts were totally safe turned out to be bunkum, and all the main characters who were down there made it through. Still, there’s three episodes left, so don’t count anyone as completely safe just yet.

None – but to be fair, in an hour-and-a-half battle sequence, where are you meant to fit it in?

Oh yes. All three of the beasties, although they quickly get cut off from the larger battle when the white walkers summon a mist – resulting in the guilty chuckle of Daenerys and Jon getting into an air traffic accident. Still, they’re all here and firing on all cylinders.

The star of the show in this category is probably the dead-and-loving-it Viserion, who, after a midair slugfest with the other two where he gets half his face ripped off, parks himself in Winterfell’s courtyard to vomit blue fire over everything he can see. Many works of fantasy have some brave hero take on a dragon head to head, but even injured, Viserion manages to keep Jon pinned down hard enough that he doesn’t even think about it.

READ NEXT: 11 Best Moments From Game of Thrones Season 8: Episode 3