Home
Music
How To: Not Be A Dick At A Festival Bar
Music
·7 min read

How To: Not Be A Dick At A Festival Bar

Festival season is upon us! The sun is out, the flip-flops are out, as you are reading this there are hundreds of people looking despairingly at the half-erect tent in their living room, trying to work out where the hell the rest of the tent poles are. It’s the most wonderful time of the year.

I will be in attendance at several festivals this year but, because times is ‘ard, I will be behind a bar instead of doing the usual fun festivally things. I am sad that I won’t be able to watch any bands. I am not sad that I won’t see any people trying to do a sneaky shit among the crowd in broad daylight and then falling into it, because frankly I have already seen that too many times in my young life. There is a strange phenomenon that I’ve noticed over the years, where certain people seem to think that by virtue of being at a festival they are somehow above all laws and social conventions: “Wheyyyyy it’s a festival! Anything goes! I can act like a total berk all weekend. I can get drunk, piss myself, then go back to my regular life on Monday without anyone I work with knowing that I knocked a small child off his stilts and broke his nose, like a total CUNT would” (It would be nice if I was exaggerating for effect, but I really saw that happen at Bestival 2007. People, eh?) Anyway, I got my first experience of festival bar work at Field Day this weekend and noticed that the people who are kind enough to spend their weekend enabling you are by no means exempt from the wrath of the Festival Dick, so I’ve compiled a handy list of suggestions for anyone who might want to redeem our faith in humanity this summer by acting like a NICE, GOOD PERSON after fighting your way through the ocean of people waiting for an overpriced Strongbow. 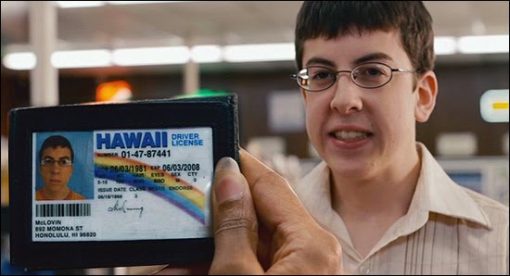 I cannot stress the importance of this one enough and I would have thought it was an obvious point, but this weekend proved me wrong. Now, look. I don’t care how old you are. None of us do. I can guarantee you that not one single member of staff you see before you at a festival bar signed up to pursue their passion of enforcing age restrictions. Yes, I’m sure that those of you over 30 probably think it ridiculous that I’m asking you for proof of age. And yes, those of you who haven’t brought ID to an 18+ festival must be infuriated when I refuse to serve you.

But here’s the thing: the security people who let you in? They don’t have much to lose in letting a few kids in. If I get caught serving someone underage, though? I lose my job straight away, get an instant fine that would take me about 12 hours to work off (except I can’t, because I’ve just been fired), and I can be prosecuted for selling to minors. Like, do you really think I’m going to risk all those bad things happening to me because you couldn’t be bothered to put your driving license in your pocket before you left the house? Licensing enforcement officers are usually lurking around at most festivals to test bar staff are doing sufficient ID checks, planting ID-less kids to try and catch us out. So yeah, that basically means I’m going to ID everyone under 50, just to be safe. Please, next time you go to a festival without any proof of age and can’t get served, don’t whine about the fact you’re 28. I ain’t Mystic Meg, son. Move yourself halfway down the bar and try again with a different staff member. Or even try a different bar, there are normally hundreds of them at a festival fergawdsake. Or, just bring your ID and make life easy for everyone involved because if I ask you for it and you don’t have it, you’re getting nothing but a bottle of water from me, kiddo. 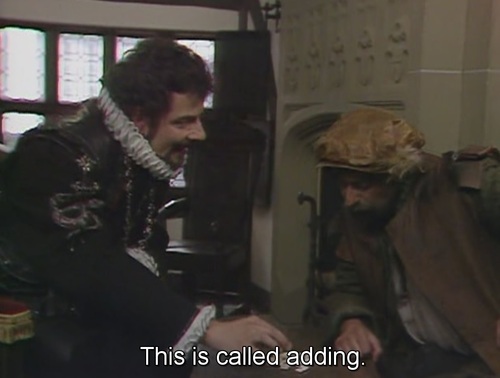 You may think you’re being extra-efficient by reeling off a list of 15 different drinks as quickly as you possibly can, but those 5 seconds you saved by not taking a breath have not helped you one bit. See, the time you take to order your round is the time I’m taking to try and total the cost of them all up in my head. The faster you go, the higher the chance I’ll ask you to repeat your order half a dozen times to make sure I got it right. On that note, if you’ve been using your queuing time to add up the amount and I then get it wrong, yes, by all means correct me. No one wants to be overcharged, I’m not trying to rip you off, my maths is…so-so.

BUT, can you please not be a dick about it? I know that adding things together is not the most complicated of jobs, but before you got here I’d already been doing hundreds of different variations of this for 8-9 hours. Do you know the last time I had to do this much mental arithmetic? NEVER. I’m a LITERATURE STUDENT.

I know the bar queues are infuriating. Chances are you’ve spent most of your day queuing to get in, for food, for gross toilets, for rides, and now at the bar. The struggle is real, I’ve been where you are. But I can promise you this very real and true thing: you are NOT going to get served any faster by shouting at us, whistling at us (I’m not a dog, I won’t respond to it), or waving your money in our faces as we walk past. I’ve seen you, friend. Just like I’ve seen the people next to you (who were here first) waiting quietly while trying to make hopeful eye-contact with me. Guess which of you is getting served first? Carry on that way, and guess who isn’t getting served at all?

All servers are told at the beginning of their shift that they must refuse to serve anyone who is too intoxicated, and to look out for certain signs, including – you guessed it – aggressive behaviour. And frankly I don’t care if you’re sober when I turn you away: if you think that’s acceptable behaviour when you’re sober, you really think I’m going to add fuel to that delightful persona of yours so you’re even more intolerable the next time you venture to the bar?

Mate, I can tell that you’re tripping your tits off and that’s very nice for you but I don’t want to know what you’ve been up to or what my aura looks like. You don’t really care how I’m doing today, or how long I’m working, or whether I’m enjoying it. Let’s move this along. I don’t want to have a conversation with you right now, because the second support act has just finished and there are three thousand people lining up behind you. Order something, get back to your evening.

I don’t mean to sound curmudgeonly here, it’s just a question of timing. If you truly are THAT desperate to come and see how we’re doing and have a good ol’ chinwag, do it at lunchtime. The bar is usually dead until 3pm, there’s your chat window. I will be the friendliest, most avid listener you’ve ever known. Try and strike up a conversation when the bar is so busy I can’t even see the back of the queue? We’re gonna have problems.

5. Remember that bar servers have no say in ANYTHING.

Believe me when I say that the people serving you do not get a kick out of denying you things like extra cups, or ice, or unopened bottles. or extra coke in that drink you just ordered. We fill it up to the line specified, that’s it. I know it’s not fair, I know prices are ridiculously inflated and that you’re a captive audience, but I cannot give you anything extra no matter how much you ask, bargain or argue with me.

Yes, I am going to act like a total jobsworth because it’s what keeps me employed. A fun thing that not many people know is that a lot of staffing companies that provide festival staff offer a cash reward to anyone who snitches on someone else for stealing. Stealing doesn’t just include theft of money, oh no. If one of the 15 people working this bar with me sees me giving away free drinks, filling drinks further than the specified level, or even handing out cups (they can be taken to recycling points for cash, so we’re not supposed to hand out empty ones, it’s a REAL RULE, not something I just made up to mess with you), they can toddle off to a manager and I get fired, fined, prosecuted, you know the drill. So please bear in mind when I say “sorry, I’m not allowed to do that”, I’m really not allowed. Servers don’t make up arbitrary rules, it would be a lot easier to give you whatever you want and be done with it, but the Lord Bar Manager has many spies, many spies with many eyes.

TL;DR – BE NICE TO YOUR SERVERS.

They are doing the best they can. And finally, please don’t compare us to Nazis when we won’t give you an extra cup. Did you ever take a history class? Not getting everything you want all the time is not quite the same as the fuckin’ holocaust.